M-Sport Heads To The Rally Show

The Rally Show in Cornbury Park

M-Sport is pleased to announce that Henning Solberg and Ott Tänak will drive a Ford Abu Dhabi World Rally Team Ford Fiesta RS WRC at The Rally Show in Cornbury Park this weekend.

Solberg, a member of the M-Sport Stobart Ford World Rally Team, joins The Rally Show line-up for the second consecutive year, and will appear on Saturday 14th May.

Malcolm Neill the show’s Managing Director said: “We are delighted to welcome Henning back, he was a huge star of last year’s event, and when he gets behind the wheel of the new Fiesta RS WRC it should be awesome.” 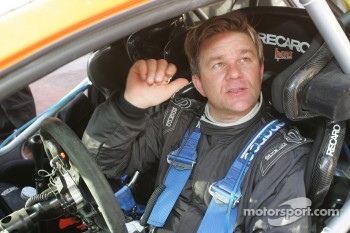 Henning Solberg adds: “I really enjoyed The Rally Show last year – the crowds were fantastic. We’re very lucky in rallying to have so many loyal fans, I really appreciate all their support and it’s fantastic to be able to help give something back to our fans. I’m really looking forward to next weekend and can’t wait to show everyone Ford’s new Fiesta RS WRC.”

On Sunday young Estonian Ott Tänak, who claimed his maiden win in last weekend’s S-WRC category in Sardinia, will take to the wheel of the Fiesta RS WRC on Sunday 15th May.

He is the protégé of five-time WRC event winner Markko Märtin and impressed last weekend with his seventh-place finish at the fifth round of the FIA World Rally Championship.

“I had a fantastic time at last week’s Rally Italia Sardegna and now I’m really excited to come to the UK and perform at The Rally Show. The fans are such a big part of rallying and I’m looking forward to meeting everyone there on Sunday,” said Tänak.

The Rally Show is a firm fixture on the motorsport calendar that is being held for the first time at Cornbury Park, Oxfordshire. Alongside competitive rallies, the weekend will include demonstrations by world rally cars, buggies and stunt driver Terry Grant. On Saturday 14th May the crowd will enjoy a fly-past by the RAF Battle of Britain Memorial flight that recently took part in the Royal Wedding celebrations.