On Friday morning, the WRCs finally stepped onto the gravel. The leg began with El Cubilete, named after the hill with a statue of Christ at its peak, 2,579 metres above sea level.

By the end of the long, gruelling first leg of Rally Mexico, a group of four crews had moved clear of the rest of the field in the fight for the podium places.

Third overall, 42s off the pace, Mikko Hirvonen and Jarmo Lehtinen ended the day in the leading group. Dani Sordo and Carlos del Barrio coped well with the difficulties of sweeping and getting used to the Central American stages again to gain a firm foothold in the top five. 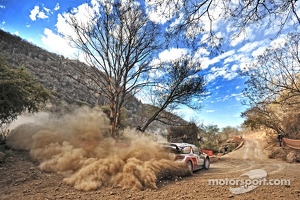 The rally got underway on Thursday evening, with two super special stages run just after the ceremonial start held in front of Guanajuato City’s Alhondiga, the former granary which is now a huge museum.

Mikko Hirvonen, Dani Sordo and Chris Atkinson took no undue risks on these warm-up stages, entering parc fermé for the night bunched together in fourth, fifth and sixth places.

On Friday morning, the WRCs finally stepped onto the gravel. The leg began with El Cubilete, named after the hill with a statue of Christ at its peak, 2,579 metres above sea level.

Some drivers were already out of the rally at this point, caught out by the rocks kicked up as more cars completed the stages. Chris Atkinson made it to the end of the stage, but had damaged the power steering of the Abu Dhabi Citroën Total WRT’s DS3 WRC.

The Australian and his co-driver Stéphane Prévot had no choice but to go ahead with mechanical repairs that cost them 3m 30s in penalties. They were however able to continue with their race.

After returning to the service park, his overall assessment was fairly positive. “I’m not totally happy, because I would like to be a bit nearer to first place, but it’s nonetheless a good start insofar as the gaps are still pretty small,” confirmed the Citroën Total Abu Dhabi WRT driver.

“In theory, we had the best starting position but the roads are so full of potholes and rocks that they are not sweeping clear as much as we had thought they would.”

“It hasn’t been easy returning to this rally in such difficult conditions,” explained Dani Sordo, who was fifth overall, over a minute off the pace.

“As there were quite a few retirements among the drivers starting ahead of me, very quickly I found myself running in a more difficult starting position.

There were tracks, but the lines weren’t clearly marked out and so I ended up having to sweep my own racing line. Having said that, I had a good feeling on the first two stages of the day, so I'm going to try and keep it up.”

The second runs on the stages enabled Mikko Hirvonen to pursue his battle with Østberg and Neuville. Once again quick on Las Minas, Los Mexicanos and El Chocolate (SS9 to SS11), he ended the day nine seconds adrift of second place.

“The second loop continued where the first left off. Apart from on El Cubilete where I lost time without really knowing why, things went well,” reported Mikko.

“I am pleased with the car and I’m enjoying the fight. We have completed the longest day of the rally, but we haven’t reached the half-way stage yet, so there is still a long way to go.”

Although he held onto fifth place at the end of the leg, Dani Sordo wasn’t pleased with his performance: “I struggled to find the right pace and adapt to the car.

I lacked confidence, and very quickly we were losing a second per kilometre… We’ll analyse my performance today so that we can take a different approach to the second leg.”

After dropping down to fifteenth following the penalties collected on SS4, Chris Atkinson then produced a fine performance with a series of fast times throughout the day.

The Australian had moved back up to tenth overall after SS11, which put a big smile back on his face: “I had a fairly standard Rally Mexico mishap, when I hit a rock that wasn’t there in recce.

The first result was not having to retire at that point. Then the team did a great job in the service park to fix the car and I was able to continue. It’s nice to be able to pay them back with a few good times.

We’ll keep pushing tomorrow to try to keep moving up the standings.”

Proudly carrying the flag for Mexico, Benito Guerra’s DS3 WRC ended the leg in eighth position overall. For his first rally in a World Rally Car, the reigning P-WRC Champion produced a solid performance: “I’m really pleased with this result and the way that things went today!

A WRC is very different from the Group N car that I drove last year and I learned a lot as we completed more of the stages. I had a good scrap with Ken Block, who has a lot of experience and who is often quick here. I’m going to try and get a bit closer to him tomorrow...”

Day two of the Rally Mexico - Ogier still in the lead