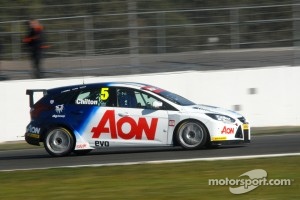 Nash joins the team after three seasons in the British Touring Car Championship; he took an impressive win at Rockingham last season on his way to clinch the Independent title.

After spending most of the winter developing and building the WTCC Focus, team boss Mike Earle commented: "It's great to have the two most recent BTCC Independent champions; that kind of experience and ability holds us in good stead for our first season in the World Touring Car Championship. We've spent a great deal of time and effort in designing and building this car for the upcoming season and can't wait for it to start."

The team tested with Chilton and Nash for two days in Valencia last week; they will now move on to Guadix and Estoril for two further test sessions.

Chilton said: "I'm incredibly excited about the WTCC. It's a new challenge for me and the team, but I know we've got the experience and the tools to do a good job. It's going to be a different season, not knowing the tracks or the competition, but that's part of the appeal. The initial time I've had with the WTCC car has given me a lot of optimism. I'm confident we can take the fight to the established teams even in our first year."

And Nash echoed: "I'm really excited and pleased to be moving on to the next step of touring cars. I've had a great time in the BTCC, however everyone has aspirations and this was ultimately the next step in my career. I believe that I'm in the best position to have a successful season with Team Aon."

PEPE ORIOLA TO STAY WITH SUNRED

After collecting some interesting results in his maiden year with the team, including a second position in the FIA European Touring Car Cup, the 17-year-old Oriola will be driving a SEAT León car powered by the new 1.6 litre turbo engine built by SEAT Sport.

"I have received offers from other teams, but I decided to stay with a Spanish team. First because they will use SEAT's new engine, and secondly in view of a possible return of the SEAT Sport works team in 2013," said Oriola.

After a first test at Barcelona's Catalunya circuit tomorrow, Oriola will drive again at Valencia on February 12 and 13.

SUNRED team principal Joan Orús commented: "We will do our best to put Pepe in the conditions of being competitive. He improved a lot in his first season and has the potential to be on the Yokohama Trophy podium in each race. As for the team, we are close to finalize deals with other drivers, as we aim for a line-up of three or four cars in the 2012 WTCC."

SEAT Sport's new 1.6 litre turbocharged engine for the 2012 WTCC completed its first run Tuesday at Valencia's Circuit Ricardo Tormo. Test driver and former WTCC race winner Jordi Gené was at the wheel of a SEAT León car, while Lukoil Racing Team's Gabriele Tarquini could not join the test due to the bad weather conditions that are currently plaguing Italy.

Gené completed more than forty laps of the Spanish track without meeting with any technical issues. He and the team focused on the engine set up and mapping.

"I am very pleased with the work we have done. This first outing was completed without problems and allowed the team to focus on adapting the engine to the circuit. I believe this unit has a great potential for further developments," Gené said.

The team will test again in Valencia next week, with Gabriele Tarquini.

The Chevrolet team returned to Valencia's Circuit Ricardo Tormo for another test session in preparation of the new season.

Reigning champion Yvan Muller and vice-champion Rob Huff shared driving duties in the two-day test, while Alain Menu, who had tested in Valencia a few weeks ago, worked with the engineers.

The RML team were aiming for validating the 2012 Cruze configuration and specs; a third Cruze took also part in the test: Rickard Rydell's car run by the Nika Racing.

Yvan Muller said: "It's nice to be at the wheel of a race car again and I'm happy we had good track conditions as the engineers wanted us to test and compare a number of things. I am anxious to get back to racing soon."

Rob Huff added: "We had covered considerable mileage, and this is exactly what drivers need and engineers want at this time of the year. The team have worked a lot during the winter and the Cruze feels very good to drive."

Changes made to 2012 calendar

The ultimate title fight to be staged in the Emirates

Tarquini and Menu to give Hyundai TCR debut