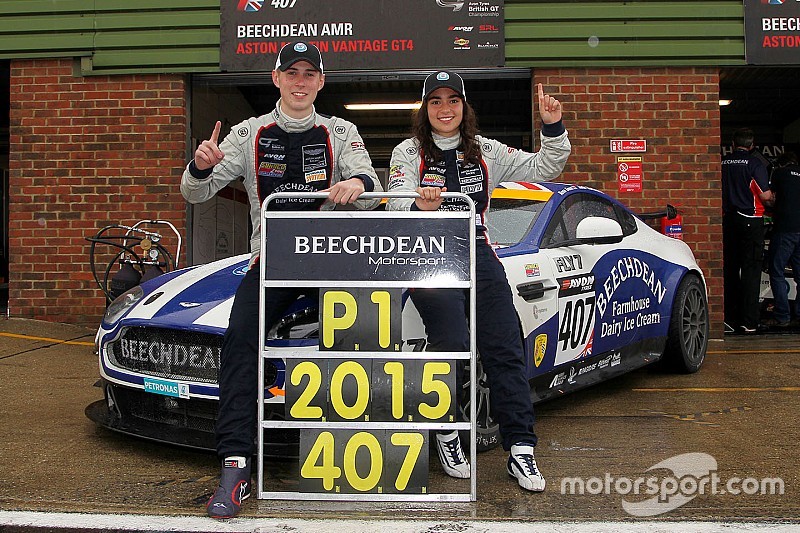 17-year-old Jamie Chadwick was happy to "unexpectedly" wrap up a record-breaking British GT4 crown with her teammate Ross Gunn after a tough Snetterton double-header.

Chadwick and Gunn, racing an Aston Martin Vantage for Beechdean Motorsport, lost ground in Race 1 at Snetterton due to a brief engine shutdown scare, but kept it together under heavy rain in Race 2 to be crowned champions with one round to spare.

In doing so, the duo, who followed in the footsteps of Beechdean's previous GT4 champions Jake Giddings and Ross Wylie, have become British GT's youngest-ever championship pairing, at a combined age of less than 36.

Chadwick herself, meanwhile, is not only the youngest racer to be crowned champion, eclipsing the 2004 record held by then 18-year-old Jonny Cocker, but also the first female driver with a British GT title.

"We didn’t really expect it after Race 1 but I guess conditions played into our hands a little bit," she reckoned after the race. "Needless to say I’m absolutely delighted, and to do it a round early is the icing on the cake.

"Those stats are just a bonus, though," she added. "I’m here just to race and hopefully win."

18-year-old Gunn, whose title capped off a strong return campaign after a year-long racing hiatus due to budget, was similarly stoked.

"It’s quite unbelievable. All the hard work we’ve put in throughout the year has been leading up to this," he said.

"I need to say a big personal thanks to [Beechdean owners] Andrew and Susie Howard who took me on at the start of the year when I had absolutely nothing. From where I was to now is a dream, a real dream."

Neither of the duo did GT racing before this season, with Gunn stepping up from single-seaters and Chadwick graduating from Ginetta Juniors.

"I wasn’t really expecting this after stepping up from Ginettas," she said. "Although we knew coming in with Beechdean and the credentials they have would put us there or thereabouts.

"But at the end of the day it was up to Ross and I to deliver. And to win the title is just unbelievable and awesome!"