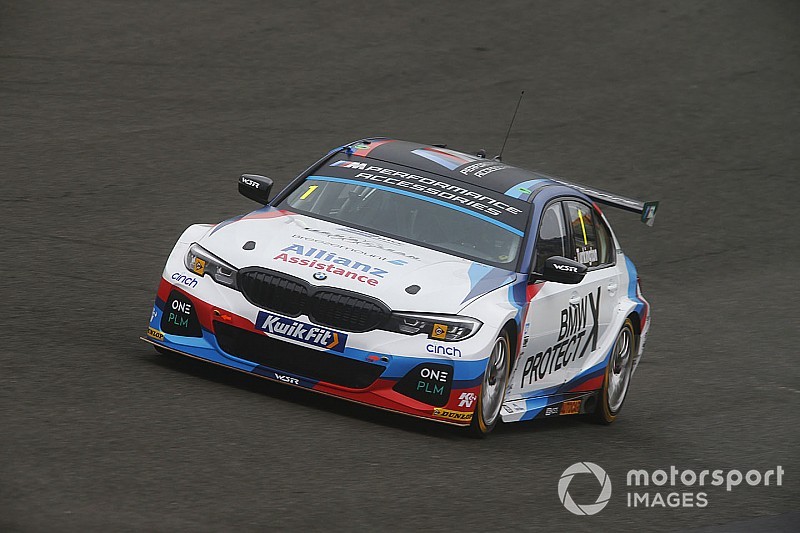 Colin Turkington claimed an emphatic BTCC victory in the opening race at Donington Park, leading from lights to flag over Ashley Sutton.

The WSR BMW driver never faced a serious threat for the win, pulling clear at two restarts following a safety car to take his 47th series win by 2.254 seconds.

Having scored his first pole since 2016, defending champion Turkington made a clean getaway in his ballast-free 3 Series to lead into Turn 1 while Sutton dived up into second.

His good launch, combined with points leader Josh Cook maxed out with 54kg of ballast and starting on the hard compound option tyre, meant he out dragged the BTC Racing Honda off the line.

But the race was neutralised by the safety car after a heavy shunt for Andrew Jordan and Adam Morgan on the first lap.

After a strong start, Jordan passed Aidan Moffat and Ollie Jackson but on the approach to Old Hairpin Rob Collard dived up his inside.

The pair touched and as Jordan tried to collect the slide he spun across the track where an unsighted Morgan shunted heavily into the driver’s door of the left-hand drive BMW.

Stephen Jelley then added a second hit as the cars parted in front of him while Jackson and Jake Hill also collided in the melee.

After a four-lap tidy up, Turkington took an early restart and was well clear of Sutton as Sam Tordoff closed on Cook’s Honda for third.

The pair ran side-by-side through Coppice and into the chicane but touched. Cook suffered a puncture as a result and dropped down the order before his left-rear tyre delaminated.

That combined with Nicolas Hamilton shunting into the wall at the pit entry resulted in another lap behind the safety car.

Again Turkington was clear of Sutton at the restart but Matt Neal progressed passed the Toyota of Tom Ingram for fifth.

On lap 11, Turkington and Sutton were edging away as Tordoff spun by himself under braking into the chicane to promote a fast-starting Tom Oliphant onto the podium having kept his nose clean.

Turkington then set the race’s fastest lap as he pulled away from Sutton at the rate of two tenths per lap, cruising on to win.

Behind Sutton and Oliphant, Neal’s robust defence kept Ingram behind with Cammish in sixth.

Senna Proctor transformed his lowly 23rd effort in qualifying into 12th amid the crashes, while Tordoff recovered to 13th ahead of Moffat.