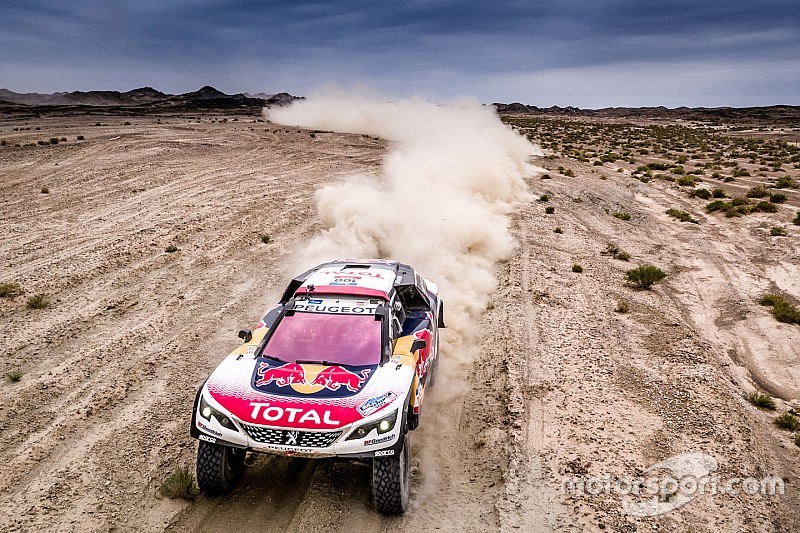 Stéphane Peterhansel (Peugeot 3008DKR n°106) in cars and Martin Kolomy (Tatra Phoenix n°311) in trucks, win the 11th stage of the Silk Way Rally between Dunhuang and Jiayuguan, situated at the western end of the Great Wall. On the eve of the two stages considered to be the most enjoyable but also the toughest of the race, Cyril Despres (Peugeot 3008DKR n°100) and Dmitry Sotnikov (Kamaz-Master) continue to dominate the event in their respective categories.

Eighth car to start on this relatively short special, Stéphane Peterhansel and Jean-Paul Cottret (Peugeot 3008DKR n°106) had at least one good reason to keep up a good pace today – to get up behind Cyril Despres, their team mate and race leader, as quickly as possible, so as to fulfil their role as rapid assistance.

Leaving the line 8 minutes behind Despres and Castera they never actually got into the wake of the other Peugeot 3008DKR, but their efforts were rewarded with a 4th stage victory, the 9th for Team Total Peugeot. Second at 1m13s, Cyril Despres and David Castera will once again be able to count on their ‘full risk’ assistance policy tomorrow over the first big dune stage of this Silk Way Rally.

Behind the two Peugeots, came the two Mini John Cooper Works of Yazeed Al Rajhi (3rd at 2m08s) and Bryce Menzies (4th at 4m58s). The American takes advantage of the Chinese driver Han Wei’s (6th at 11m04s) extreme caution to take the 2nd place off him overall. Not that Menzies should get too comfortable because neither ‘General Han’ and his Geeley SMG buggy, nor Christian Laveille (Baïcmotor n°107) have the slightest intention of giving the Mini driver an easy ride. Three days from the final finish line in Xi’An, the battle for the podium has only just begun!

Driving in tight formation since arriving in China, the Team Kamaz-Master drivers would appear to be managing the race. Not that they would entertain the idea of letting a stage win slip from their grasp without a struggle.

One of the principle actors in the truck race since the first special in Russia, the Czech driver Martin Kolomy and his Tatra Phoenix n°311, knew therefore that he’d have to get on the gas if he wanted to get this 3rd win and defend the third place overall that Airat Mardeev would so like to get his hands on.

Beaten to the line yesterday, after a puncture less than 50 kilometres from the finish, Lady Luck decided to shine on Kolomy a little brighter today. Fighting over mere seconds with the Kamaz-Master of Shibalov and Sotnikov that started just behind him, the Czech driver finally finished 49 seconds ahead of Anton Shibalov.

Third on the stage at 1m07s, Dmitry Sotnikov and his new generation Kamaz-Master maintain an almost 15 minute lead overall.