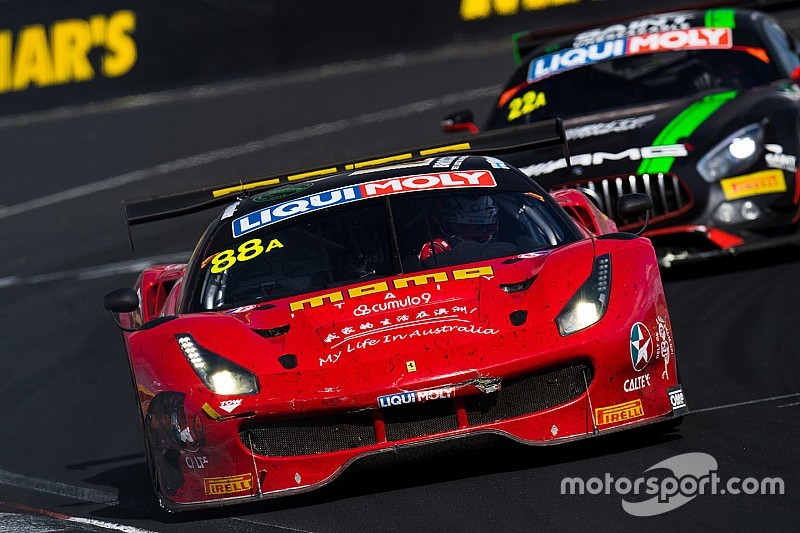 Jamie Whincup says his battle with Shane van Gisbergen in the closing stages of the Bathurst 12 Hour was ‘hard and fair’, after the pair clashed doors down Conrod Straight inside the final hour.

Whincup, who won on what was not only his Bathurst 12 Hour debut, but his first race in a GT3 car, was in the car for the final stint, which meant a tough door-bashing battle with van Gisbergen.

Reflecting on the stoush, Whincup said it was a wild, but completely fair, fight.

“It was quite ironic that me and my teammate [in Supercars] Gizzy were fighting for the win right at the end there,” said the six-time Supercars champ.

“He was driving like he usually does, all over the place – which is good, he’s hard and fair. I certainly enjoyed the battle, there is always a bit of grass action when we’re rubbing panels.”

Whincup’s teammate in the #88 Maranello Ferrari Toni Vilander added that the round-the-clock race was ‘one of those days’ where almost nothing went wrong for the Ferrari squad.

The Finn put in one of the stints of the race in the third-last hour, a stunning sequence of laps putting the carin a commanding position.

While it wasn’t a perfect day, Vilander forced to serve a drive-through penalty in the first hour after illegally warming his tyres on a restart, the Finn said it was as close to a clean run as you can expect over such a long race.

“You know sometimes you have those days, just felt really comfortable in the car,” he said.

“Even all the traffic seemed like it was dropping in the right places with the right timing. When we dad clear air with the car and it felt like it was working perfectly. Even the tyres, I never had to go off line. Sometimes when you’re fast feels like it’s easier so today was definitely one of those days.

There are still races for me to win, Sebring, Daytona – and this was one of those as well and now this is done. I’m really, really happy, really, really proud.

“Sometimes when you start the day you have a feeling something good might happen and here we are – winners.”

“The main objective for me was to stay out of trouble ands keep it on the lead lap which I was lucky to do getting out of the gravel trap,” he said.

“So, that for me was most important to stay on the lead lap. We knew we had good car pace to come back and to really for me, it was an enjoyable day to part of the crew.”