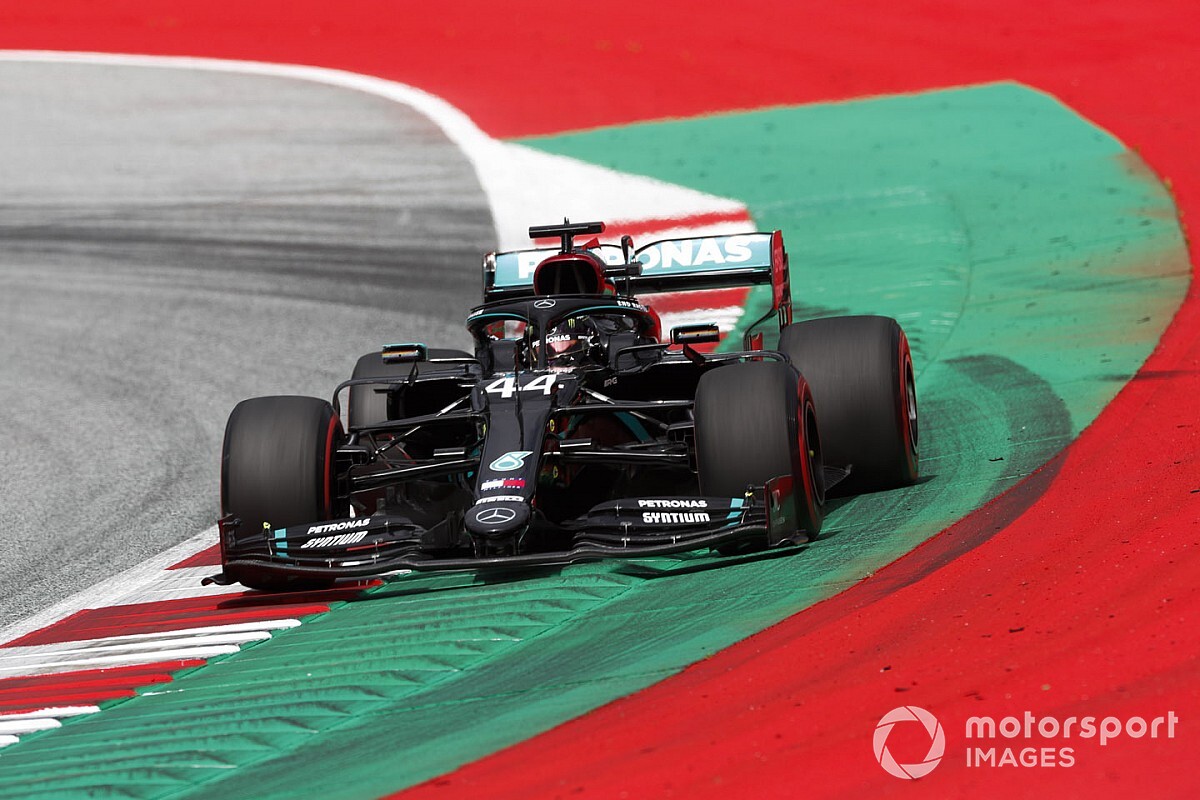 Mercedes' Lewis Hamilton completed a clean sweep of practice for the 2020 Formula 1 Austrian Grand Prix with the fastest time in FP3, which was disrupted by Nicholas Latifi's crash.

Under sunny skies at the Red Bull Ring on Saturday morning, Carlos Sainz and Daniel Ricciardo enjoyed brief spells at the top of the times in the early running before the Mercedes drivers – initially led by Bottas – moved to the head of the times on the medium tyres with a 1m05.488s.

Sebastian Vettel then put Ferrari on top, using the soft tyres to put in a 1m05.159s, before Hamilton used his mediums to take P1 with a 1m05.140s.

The session was the suspended for nearly 10 minutes when Latifi lost the rear of his Williams at the exit of Turn 1, with his snap to catch the oversteer as he approached the runoff kerbs pitching him into the barriers nose first.

The rookie was able to climb from his car and return to be checked over in the paddock while his FW43 was recovered.

When the session resumed, the Mercedes drivers returned to complete their medium tyre running, which meant Ferrari moved back to the front using the soft rubber.

First Vettel lowered the P1 benchmark to a 1m04.851s before Charles Leclerc stole ahead of his teammate for the first time this weekend with a 1m04.703s.

But when the Mercedes duo bolted on the red-walled soft tyres the roared back to the top, first with Bottas demoting the Ferrari drivers and then Hamilton posting the session's best time with a 1m04.130s.

Hamilton established his advantage in the opening sector and although his teammate clawed back time in sector too, the world champion held on through the lap's conclusion to take P1 by 0.147s.

Verstappen then enjoyed a comparatively empty track to slot his Red Bull into third – largely staying with Hamilton's time through the first two sectors before fading in the final segment to wind up 0.283s adrift.

Perez left it late to complete his final qualifying simulation run – his car again seen smoking during the early running as it had in FP1 – and although he gave away a just over a tenth to Hamilton in the first two sectors and then double that in sector three he still slotted into fourth ahead of Leclerc.

Alex Albon, whose front wing had been fitted to Verstappen's car ahead of qualifying due to damage picked up on the Dutchman's on Friday, improved late on to push Vettel down to seventh.

Lance Stroll took eighth in the other Racing Point, with Pierre Gasly slotting his AlphaTauri in ninth with a late flyer.

McLaren's Lando Norris rounded out the top 10 ahead of Esteban Ocon, who did not appear in the late running for Renault.

Daniel Ricciardo finished 12th ahead of Carlos Sainz, while George Russell took 15th for Williams, which did not have a car get out of Q1 in 2019, ahead of Kevin Magnussen and the Alfa Romeo pair.