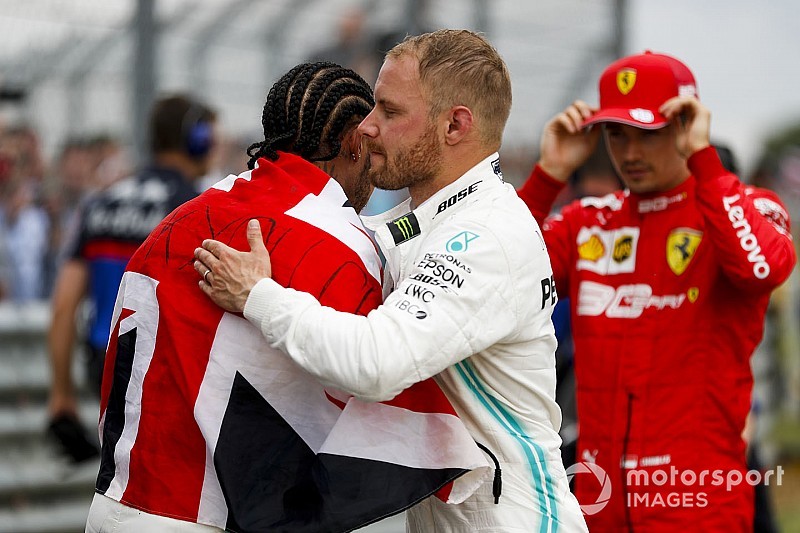 Mercedes will check to make sure it is not "unconsciously favouring" either of its Formula 1 drivers by allowing them to execute different strategies, like in the British Grand Prix.

Lewis Hamilton overcome teammate and poleman Valtteri Bottas to clinch a record-breaking sixth win at Silverstone, after opting for a one-stop strategy and a long second stint on hard tyres.

That, combined with a safety car before Hamilton had made his first stop, allowed him to leapfrog Bottas, who had pit early and stuck to a two-stop strategy.

Bottas thought a one-stop was “out of the question” and even Hamilton admitted he was not sure he would be able to stick it out on the hard tyres.

Team principal Toto Wolff said the strategic freedom was a result of driver-led discussion in the team’s morning meeting, but he said questioning the move away from the team’s tendency to run the same strategy was “a fair argument”.

Asked by Motorsport.com to explain the different strategies, Wolff said: “The discussion we had with them in the morning was, if you were to put them on the same tyre on the same strategy, basically Turn 1 or lap one would lock in the result.

“And we felt that, picking up on their suggestion, it would provide an interesting race. It still overlapped on many instances, we knew they would be racing each other but maybe with a different strategy, so that's what we tried.

“I think in hindsight in the argument has value, and I think we need to look at it – are we favouring somebody unconsciously? Which we wouldn't want to do.

“It created more experience and more data for us to judge whether it's something we want to do in the future.”

Unlike Ferrari and Red Bull with Charles Leclerc and Max Verstappen respectively, Mercedes opted not to make a second pitstop for Bottas under the safety car.

That forced him to make a second stop later on to take a mandatory second compound, and Wolff explained there were two arguments against switching to the hard tyres when the race was neutralised.

“We were still not convinced that a one-stop would make it, so we were offsetting our strategies,” Wolff said.

“The other thing is I think he would've come out behind Sebastian [Vettel], because Sebastian was running close behind him, if I'm not mistaken.”

Vettel pit under the safety car as well but Wolff said Mercedes did not know that would happen.

“I think the call was right in not pitting him, but what must be said is that Valtteri drove a splendid race,” Wolff added. “He would've deserved also to be a winner. Both of them deserved to be winners today. Strategy and the safety car just went against him, it’s just bad luck.”

Why Bottas was always doomed to lose to Hamilton

Vettel: Important to own up to Verstappen crash "misjudgment"