Sergio Perez admitted both he and his Force India team "screwed up" after not going for a final run in qualifying for the Italian Grand Prix. 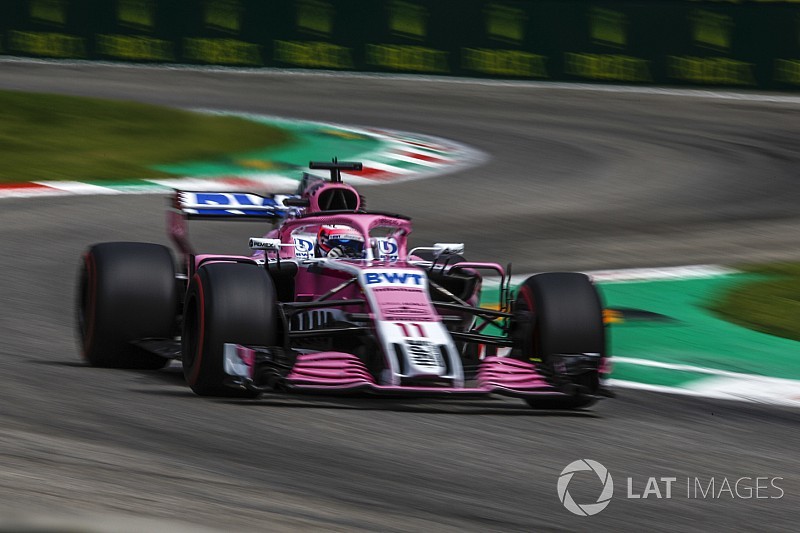 Perez appeared to be well inside the cut-off after the first runs in Q1 and the team thus elected to keep him in the garage to save tyres.

However, while he sat in the car, he gradually slipped down the order – to eventually be squeezed out of 15th place by a margin of just 0.001s to Romain Grosjean.

Less than a tenth of a second covered 10th to 17th places in an unusually tightly packed order.

Perez admitted that the team had misjudged by how much others would improve, but conceded that his first lap should have been faster.

"We had a little miscalculation there with the tow effect and the track evolving," he said when asked by Motorsport.com.

"I was two-tenths from P7, so the margin was really small. But at the same time I should have done a better lap, so we screwed up together. I hope that tomorrow we can minimise the damage and hopefully score some points.

"I was actually speaking with the team about what we can do better with the balance and so on, and I was looking at a lot of people going green, green, green.

"Everyone was very optimistic, I was and the team. And then I saw that things didn't work out. I mean we lost out by a millisecond, I was really unlucky."

Perez conceded that the situation was made worse by the car's potential at Monza and the team's need to bolster its points total after starting from zero at Spa.

"Today was a massive blow for myself and the team, given how strong the pace of the car was the whole weekend. We definitely had the pace to be best of the rest, and especially being in a good position for tomorrow.

"It hurts, it hurts a lot. It's been a difficult afternoon, we have to try to digest everything and focus on tomorrow. That's my target, get away and don't think too much about what happened today."

Verstappen: Upgraded Renault still "over a second off"