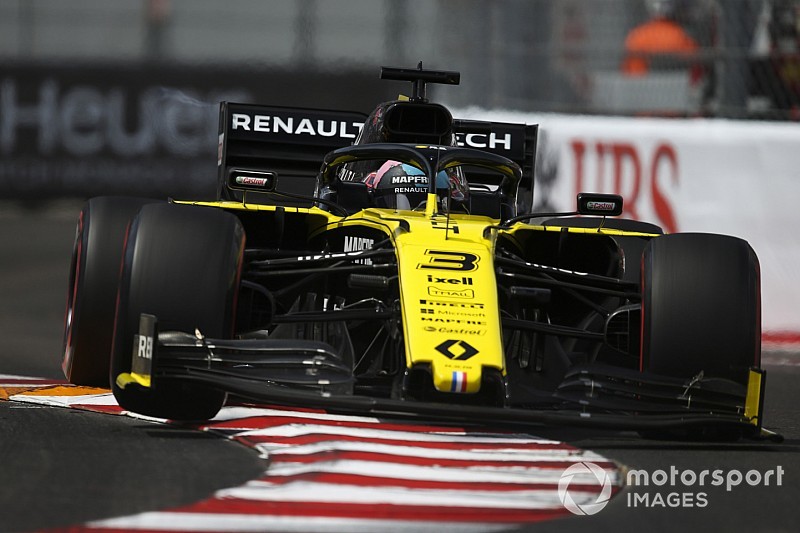 Daniel Ricciardo says Renault finally has a "real" qualifying mode in Formula 1 this year, now that its engine is back to full power.

With the French car manufacturer having had to wind back its engine settings in recent races because of reliability concerns, it has only been since an upgrade was introduced in Spain that it has had the confidence to push again.

And with Ricciardo having delivered Renault its best grid slot of the season at the Monaco Grand Prix, the Australian was full of praise for the progress that has been made on the power front.

Asked by Motorsport.com about the steps made with the engine, Ricciardo said: "[In the debrief] both Nico and myself complemented the Renault boys for our qualifying mode. It felt pretty strong.

"My reference from last year, pulling an extra gear before some apexes – so definitely a year on it is a lot better. But even from China, that was our last little step, it is getting there. We actually have a real qualifying mode this year."

Nico Hulkenberg was equally upbeat about the developments that Renault has made, and especially how well it responded from the conrod failure that hit it in Bahrain.

"They've really reacted very well, Viry, with the problems we had after Bahrain" said the German.

"They found solutions very quickly, redesigned, re-engineered, and brought the fixes to the track. That was quite impressive, and this weekend you can feel again that the engine has come back to life and we can fight again. So that's very positive."

Asked how the power unit compared to last year's, Hulkenberg said: "If we had that engine in the second half of last year we would have had a much easier life and been fourth everywhere easily. It's a really big step, serious power there."

With Monaco not being such a power sensitive track, Ricciardo expects even more to come from Renault in the next race in Canada.

"I definitely feel it is the right direction now and the nice thing is that there is still more to come and they see that," he said.

"Reliability is the thing that is going to hold us up from going that step further, but we could squeeze a bit more this weekend even on a low power circuit, you can feel it. So sure some little positives."