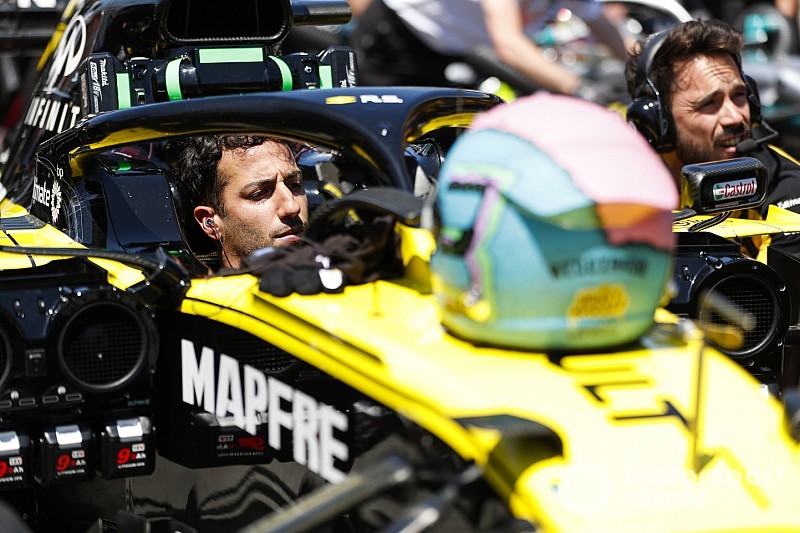 Daniel Ricciardo says Renault's recent run of form has "ignited a pretty nice fire" inside the team, which he says reminds him of qualities that make Red Bull so strong.

The Australian has helped deliver a run of strong qualifying and race results that have helped lift Renault to fifth in the constructors' championship, ahead of the debut of a major car update in France this weekend that it hopes will improve things even more.

On the back of some difficulties earlier in the campaign with reliability, Ricciardo is delighted about a new-found belief that has emerged at Renault, especially after a double points haul in Canada.

"It was important for sure," said Ricciardo about that Montreal result. "I think it had slowly been coming. We'd started putting a string of Q3s together.

"I think we were slowly releasing that weight. But I think just for the team as well, not only did it give a bit of 'alright', but it also I feel ignited a pretty nice fire.

"I think the team tasted their first taste of a pretty big result in a while, especially the qualifying. Nearly getting interviewed after qualifying - even getting a sniff of that was good to see.

"Obviously the competitor in me always wants that, that's always there, but seeing it within the engineers and the mechanics and everyone, everyone just had a buzz about 'em. So that was nice."

And while Renault still has a way to go before it can match the results of Ricciardo's former team Red Bull, the Australian says he is witnessing inside Enstone the start of a growth of confidence that his old outfit had.

"I think the biggest thing, and I'm seeing it now evolve as well, is that when I went to Red Bull they'd just won four straight titles," he said. "So I walked into a team with a certain level of confidence and, not arrogance, but confidence which can sometimes be seen as arrogance.

"But they knew they were the best, everything about them and whatever. So there's that kind of level of confidence, and I guess here, it's taken a bit of time to get that.

"It's even just the way the team responds to a fight on the track or a good result. Instead of just a little clap, it's like 'come on!' get some fire going, and I've seen already that transform from the first few races.

"I think they're starting to realise that bigger things are possible, and that's creating a bit more atmosphere in the garage."