Honda allowed Verstappen to "have a go" on straights 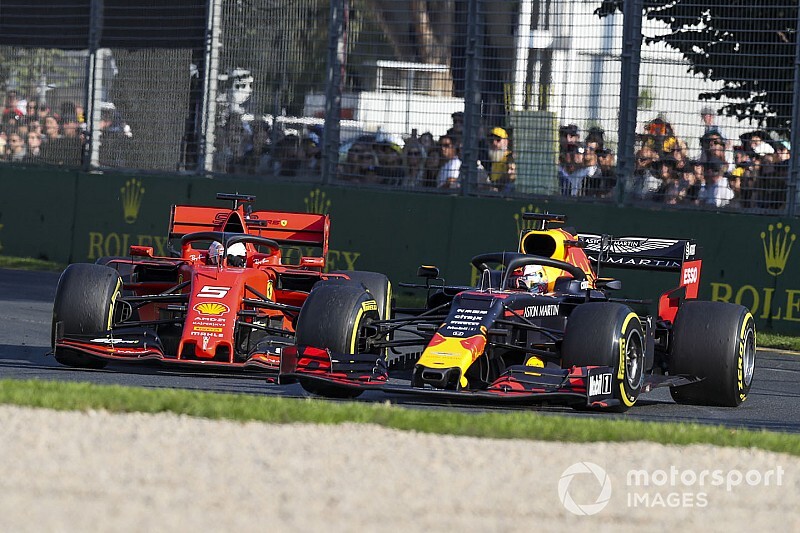 Max Verstappen says he could "at least have a go" at his rivals at top speed during his first Formula 1 race with Red Bull's new engine partner Honda.

Verstappen finished third in the Australian Grand Prix to score Honda's first podium of the V6 turbo-hybrid era and its first F1 rostrum since Rubens Barrichello was third in the 2008 British Grand Prix.

He caught and passed Sebastian Vettel's Ferrari during the race and pressure Lewis Hamilton's Mercedes in the closing stages as well.

"I could at least have a go at it in terms of top speed. It's good progress, there's a lot of positive things coming as well.

"Valtteri [Bottas, race winner] was very far ahead, still. It was a good result today but we still have to work hard to improve."

His third place finish was Red Bull's first top-three result in Melbourne since Daniel Ricciardo was second in 2014, although Ricciardo was later disqualified.

Verstappen finished further from the race winner than Ricciardo did with Renault power in 2018, but insisted it was "a very good step forward compared to last year" after beating the Ferraris by more than half a minute.

"If I just compared top speeds against the other two teams," said Verstappen. "I'm very pleased with that.

"Also, I think in general the engine has been performing very well without any issues. I guess time will tell if we can fight for top spot."

Verstappen said Red Bull had to turn around its fortunes after an imperfect Friday practice.

"Trying to challenge for second was a very positive feeling, especially after my Friday," he said.

"We couldn't pull it off but in general I'm very happy to be on the podium. We managed to turn it around in a very positive way after Friday.

"And for Honda to have their first podium in the V6 era, I think it's a great start. So, a big congrats to them."