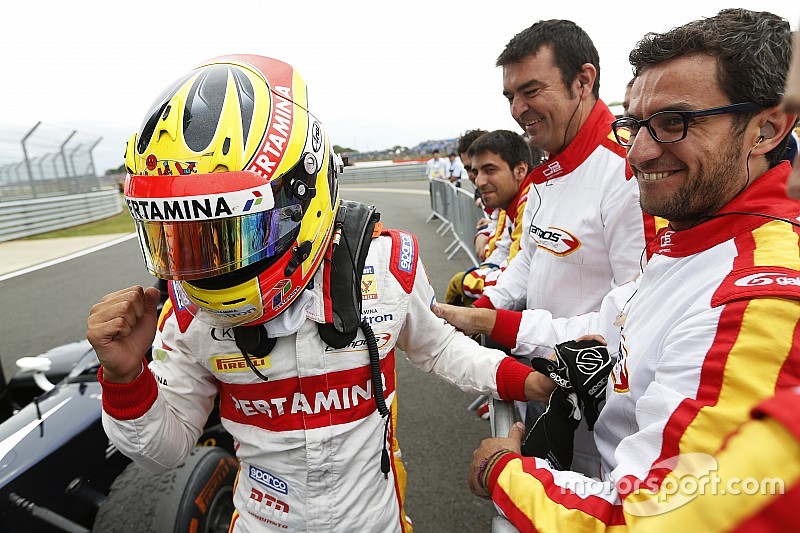 Campos Racing's Rio Haryanto took his third victory from five GP2 sprint races in 2015, comfortably leading every lap of the Silverstone outing along the way.

Front row starter Nick Yelloly, meanwhile, was shuffled down the order, letting DAMS duo of Pierre Gasly and Alex Lynn through at the start and subsequently being passed by Alexander Rossi for fifth.

With Haryanto taking a 1.3s lead over the line on the opening lap, there was an incident at Vale as Sergio Canamasas spun and was hit by Norman Nato.

On lap two, Rossi took Lynn round the outside of Copse for fourth but was visibly outside of the track limits on corner exit, which was immediately brought up by the Briton over the team radio.

And, as Rossi set out after Gasly, he was handed a five-second time penalty for overtaking off-track, prompting an incredulous response from the American.

In the meantime, Haryanto was setting the pace early on in clean air, quickly establishing a three-second lead over Marciello over the opening laps, which he then maintained for most of the race.

With the end of the race approaching, Lynn appeared to be severely struggling for pace as he had to work hard to keep Yelloly at bay lap after lap. Eventually, his defending allowed Saturday winner Sergey Sirotkin to pass Yelloly for sixth out of Vale.

And, as Yelloly moved back up to sixth past Sirotkin on the penultimate lap, Rowland caught up and demoted the Russian as well.

While Haryanto eased to the chequered flag ahead of Marciello and Gasly, Rossi's five-second penalty proved inconsequential, allowing him to keep fourth place .

A late overtake on Lynn allowed Yelloly to claim a personal-best fifth, with Rowland and Sirotkin completing the points.