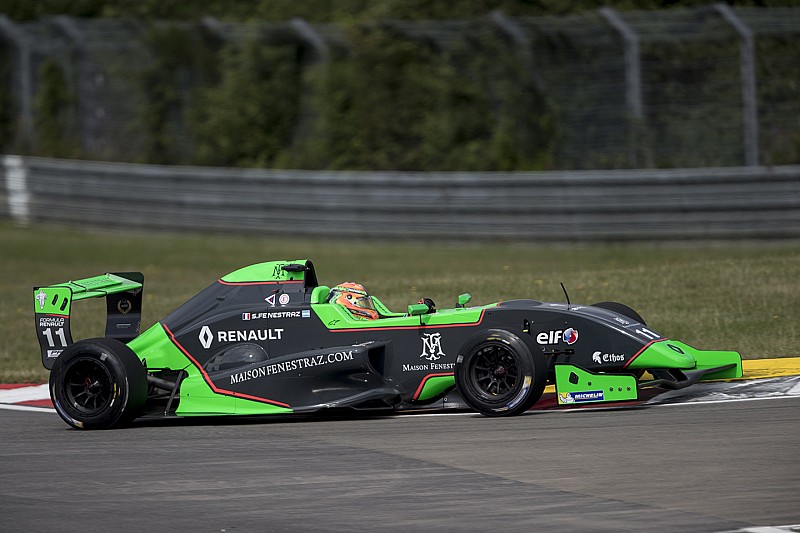 Sacha Fenestraz has sealed the 2017 Eurocup Formula Renault 2.0 title with one race to spare in the season finale in Barcelona.

Former French F4 runner-up Fenestraz is in his second year in Eurocup FR2.0, his 2017 season also featuring his European Formula 3 debut, which yielded a point for him.

As a reward for his title, Fenestraz becomes part of the Renault Sport Academy, joining GP3 frontrunner Jack Aitken amongst others.

Closest rival Will Palmer, younger brother of former Renault F1 driver Jolyon, needed to win with Fenestraz finishing ninth or lower to take the championship fight to the final race.

The 20-year-old failed to do so, only finishing sixth as a disappointing qualifying performance restricted him to eighth on the grid.

Recent Ferrari Driver Academy recruit Robert Shwartzman was the man on pole, and he held off front-row starter Fenestraz at the start.

Behind them, Gabriel Aubry made contact with Max Defourny through Turn 2, the latter spinning back into the middle of the track.

With little time to react, 11 cars got caught up in the ensuing mess, several of them going airborne after launching over the rear of their rivals.

The race was red-flagged for over 20 minutes, and on the restart, Fenestraz went for the lead again.

He failed to make it past Shwartzman, who used his superior race pace to take his sixth win of the season ahead of the newly-crowned champion.

"It just feels amazing,” said Fenestraz, who will start the last race of the season from pole.

"To be fair, I think Rob [Shwartzman] was over the moon this weekend, faster than everybody.

"But we’ve done the work so, yeah, amazing. So happy. The team did an amazing job all season.

"I think we deserved this championship, so I can’t ask for more than that. I’m over the moon."

Fenestraz, whose brother-in-law is three-time World Touring Car champion Jose Maria Lopez, started the season with a couple of second places but did not win until the eighth race at Monaco.

He was unable to win again until the sixth round of the season at the Nurburgring in July, but was still very much a title contender.

From then on, he won at least one race every meeting, including two at the Spa Francorchamps triple-header, and came to Barcelona with a 52.5 point lead with 75 available.

A podium for Palmer in the first race reduced the gap to 46.5, but the Briton’s disappointing second race crowned Fenestraz and means that Shwartzman could end the season as the Franco-Argentinian’s closest rival.