Amesbury, MA. – September 8th, 2013 -- The increasingly successful duo of Michael Marsal and Billy Johnson captured their best ever Grand-Am Rolex Series race result, driving the No. 93 Turner M3 at Mazda Raceway Laguna Seca this past weekend. Marsal and Johnson drove the No. 93 GT Class M3 to second place from an eleventh place start in Sunday's two-and-three -quarter-hour Continental Tire Sports Car Festival race. This was Marsal's second podium of the season, after narrowly missing what would have been a third at Kansas Speedway last month. Earlier this season, Marsal co-drove the No. 93 GT class M3 to a third place finish with Maxime Martin at Road America.

In Sunday afternoon's Rolex Series race, Marsal opened up in the No. 93 starting P11, one row behind Paul Dalla Lana in the No. 94 GT class M3. Marsal completed a clean 26 lap stint to work up to eighth place and then bring the car in during caution for a full service stop and driver change. Johnson was able to finish the remainder of the race with consistently fast lap times, driving the car to the front of the GT field. A series of late race full course cautions allowed the No. 93 to conserve enough fuel to finish the race completing only two pit stops. The duo completed 100 laps, finishing .940 seconds behind the No. 44 Porsche. 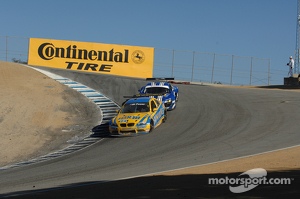 "That was fantastic! It was a great finish," beamed a champagne-soaked Marsal. "We came out of the box strong with a fantastic car from Turner Motorsport. We just executed a great race. Start to finish, we did everything we were supposed to do and the result shows. It was incredible to be on the podium at Road America, and to come back and do it again here at Laguna is even better."

Auberlen and Dalla Lana finished a disappointing twelfth place in the No. 94 GT class M3. Dalla Lana opened the race in P9 keeping the BMW in the top ten before being forced into the pits for electrical issues. A combination of electrical issues and a stop and go plus sixty second penalty sent the No. 94 to the back of the GT field. Despite the issues, Auberlen was able to set the fastest race lap with a 1:28.635.

In Sunday morning's Continental Tire Sports Car Challenge race, Auberlen and Dalla Lana ran a strong race to drive the No. 96 GS class M3 up to second place with only 2 laps remaining in the two and one half hour contest. A drivetrain malfunction on the front straight left Auberlen powerless, dropping him from second to 13th place.

"Despite a couple less than desirable finishes, the team did an exceptional job preparing these cars. To win races, everything has to fall into line perfectly." Will Turner explained. "Congratulations to Michael (Marsal) and Billy (Johnson) for their hard fought race to finish second in a highly competitive GT class. This was a well-deserved finish for the No. 93 team."