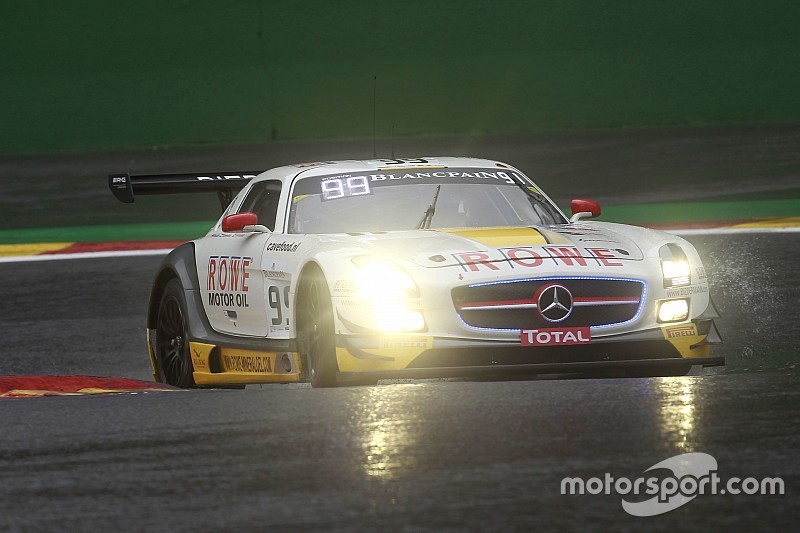 A frenetic battle for the lead between Mercedes, Audi and BMW raged and undulated as dawn broke at Spa this morning.

The No.99 Rowe Mercedes had continued to lead at a typically misty Spa. However, Nico Bastian, Stef Dusseldorp and former Force India test driver Daniel Juncadella had seen their once healthy lead drastically reduced, and they had just a slender gap over the No.45 Sports Trophy Team BMW Marc VDS Z4 driven by Maxime Martin as the race entered its 14th hour.

The gap was decreased after another safety car period (the tenth of the race so far) at 6.30am local time when the No.30 Classic & Modern BMW driven by Frederic Bouvy had to be recovered. Also still in contention and on the lead lap was the No.2 Audi Sport Team WRT R8 LMS being driven by Nico Muller and the sister Marc VDS BMW Z4 with Nick Catsburg at the wheel.

The Audi, with Stephane Ortelli at the wheel, took its turn in the lead as well after stealthily working its way up the order. The delayed No.1 Audi Sport Team WRT machine was still recovering after Laurens Vanthoor’s accident at Stavelot yesterday evening and placed 17th.

At 07.15 local time, it was the Nico Muller driven No.2 Audi that led but with the pair of Marc VDS BMW Z4s, which were right on the new-model Audi’s tail. Indeed, Nick Catsburg set the fastest lap of the race at this time with a 2m18.751s lap.

With the lead changing fluidly due to scheduled pit stops the remaining ten hours of Spa 24 Hours action looks set to be a thrilling contest between the three German manufacturers – Audi, BMW and Mercedes.

During the early hours several incidents had punctuated a fascinating race as the No.45 BMW Z4 briefly took the initiative at the front. The lead swapped along with pit stops until dawn when, after a succession of rapid stints by Maxime Martin, came to an end as the team opted to change brakes during the ninth safety car which was deployed to retrieve the No.50 AF Corse Ferrari of Rui Aguas.

There was disaster for Bentley at Spa during the night. After the M-Sport run ‘works’ No.7 car was crashed by Andy Meyrick at Les Combes last night, the sister No.8 Continental GT3 also retired when Maxi Buhk stopped out on the track while within the leading group in fourth place.

The No.84 HTP car fell down the order while in the top five. Earlier Buhk had been in collision with the No.45 Marc VDS BMW Z4 driven by Dirk Werner.

Equally, McLaren also had a tough night at Spa with the No.59 Von Ryan 650S GT3 losing time after stopping out on track after an incident at La Source. Bruno Senna managed to get the car back to the pits and it eventually re-joined, but well down the field.

The same was true of the other No.58 Von Ryan McLaren which lost many laps after a long pit stop just after the halfway point when ensconced in the top five.

Other accidents and incidents included a race ending crash for the No.18 Black Falcon Mercedes of Bernd Schneider which suffered considerable damage. There was also an incident involving the No.333 Rinaldi Ferrari which dropped the green machine back to 33rd position.

The No.9 ROAL BMW Z4 featuring Alex Zanardi continued to run in the top twenty overall. Timo Glock was at the wheel after 14 Hours and ran 9th in the PRO class.

Ferrari head Pro-Am and Am classes

Gianmaria Bruni continued to star at the Spa 24 Hours as he spearheaded the No.47 AF Corse Ferrari to hold the Pro-Am class lead.

At 07.15 local time, the factory Ferrari driver was building a gap to the second placed and fellow AF Corse run No.51 Ferrari driven by Duncan Cameron. The gap was just over the one lap mark as Bruni elected not to pit under safety car.

Third in PRO-AM was the No.32 Leonard Motorsport Aston Martin which was a further lap behind the two leading Ferraris. Stefan Mucke had been typically quick and consistent in the darkness before handing over to Michael Meadows just after 07.00 local time.

The AM class saw the No.24 Team Parker Audi of Ian Logie, Julian Westwood, Callum McLeod and Benny Simonsen dominant as they enjoyed a three lap buffer over the No.56 Attempto Racing Porsche.