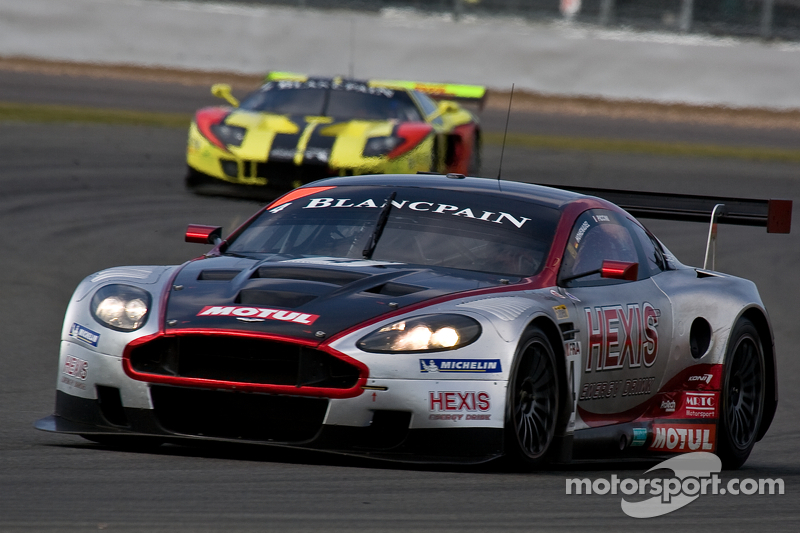 Hexis Lead the Way on Day One in Argentina 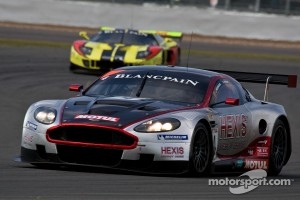 The first day at the Potrero de los Funes circuit finished with the nr4 Hexis AMR Aston Martin DB9 of Christian Hohenadel and Andrea Piccini setting the only sub 2m15s lap during Free Practice and Pre-Qualifying. Piccini set a lap time of 2m14.739 just before the end of the Pre-Qualifying session with the nr3 Hexis Aston finishing third fastest and split by the nr22 JRM Nissan. Piccini’s time was 1.9 seconds quicker than the best time set in Free Practice, which was a 2m16.681 lap set by Christopher Haase in the nr47 DKR www-discount.de Lamborghini.
- Free Practice and Pre-Qualifying reports below

The contenders for the 2011 World Title gathered on the grid for a photo shoot ahead of the final weekend of this season’s championship.
- See story below

All eighteen cars made the long trip from China to Argentina for the finale of the 2011 FIA GT1 World Championship. There have been four driver changes, with two new faces and two returnees on the grid this weekend.

Argentine race fans will have a local driver to support, with Ricardo Risatti with the TC2000 star racing alongside Bas Leinders and replacing Marc Hennerici in the nr40 Marc VDS Ford. Last year Risatti helped Marc Basseng to his first GT1 World Championship points when the All-Inkl.com Lamborghini finished 6th in the Championship Race.

Francesco Pastorelli is following in big brother Nicky’s footsteps, lining up on the GT1 World grid at the wheel of the nr11 Exim Bank Team China Corvette at San Luis, the first time two brothers have competed against each other. 24-year-old Francesco is a double Formula Ford Champion, winning both the Dutch and Benelux titles in 2007.

The younger of the two Pastorelli brothers will be joined in the nr11 Corvette by the son of a former FIA GT racer. Yelmer Buurman is the son of Herman Buurman, who raced a Marcos in the 1998 and 1999 FIA GT Championship, including one race alongside GT1 World driver Mike Hezemans. Yelmer, who like Francesco Pastorelli is also 24-years-old, is a former British Formula 3, GP2 and Superleague Formula race winner and is now making a switch to GT racing for the first time.

Christopher Haase is returning to the FIA GT1 World family for the final race of the season. Haase will race the nr47 DKR Discount.de Lamborghini with fellow German Manuel Lauck. The 24-year-old German raced last season for Reiter, finishing a season best second place at the Nürburgring alongside Peter Kox in the Lamborghini Murcielago. The 2009 FIA GT3 European Champion will arrive in Argentina after a successful season racing in the ADAC GT Masters and victory in the final FIA GT3 European Championship race in Zandvoort where he helped Belgian driver Enzo Ide to third overall in the 2011 Championship standings.

The ten drivers still capable of winning the 2011 FIA GT1 World Championship gathered on the grid in Potrero de los Funes for a photocall.

JRM’s German pairing of Krumm and Luhr just need to be within 11 points of whatever Mücke/Turner can score, or to simply match or outperform them, to take the crown. As soon as they pick up three points, they will eliminate all the other driver pairings apart from the Young Driver crew from the running by virtue of their three Championship Race wins this season.

A mere eight points separate JRM from Young Driver, with 57 on offer. There are endless permutations here that could see either team take the crown, but if JRM can take two one-two finishes, then there’s nothing Young Driver can do to stop the British team from taking the title. If Young Driver fails to score in the Qualifying Race, then a JRM Championship Race one-two would give the Nissan outfit the teams’ title no matter where the Astons finish behind them.

Young Driver are the only team with both driver pairings still in the running – but for the Gulf-liveried No.7 car of Tomas Enge/Alex Muller, it’s an extremely difficult challenge. They’d need to win both races and hope Krumm/Luhr do not pick up two points. Enge/Muller would also need their teammates to score 13 points or less.

Teammates Mücke/Turner in the sister car are in a far better position. If they can win both races, the pressure would be on the leading pair – Krumm/Luhr would need 22 points to tie on 153 and take the title on race wins countback. But the maximum they could get in such circumstances would be 24 points for two second-place finishes.

Young Driver currently lead the standings by eight points. Hexis and All-Inkl could only reasonably deny Young Driver if either were on for a pair of one-two finishes, and Young Driver’s cars were struggling.

Young Driver’s nearest rivals are JRM, eight points behind on 216 and capable of putting real pressure on Young Driver due to the strong pairing in car No.22, Peter Dumbreck and Richard Westbrook. Young Driver’s key focus will be finishing ahead of JRM in the Championship Race, which should be enough to ensure overall victory.

All-Inkl.com’s only pairing still in the drivers’ title running are Marc Basseng and Markus Winkelhock, who would need to win both races and hope Michael Krumm and Lucas Luhr – in the JRM Nissan – don’t pick up any more than two points.

The Lamborghini drivers would also need Stefan Mücke and Darren Turner in the Young Driver Aston Martin to underperform – 15 points is all the No.8 pairing need to eliminate Basseng/Winkelhock from the final reckoning.

All-Inkl.com are the rank outsiders for the Teams’ Championship. They would need to repeat their Navarra dominance with two one-two finishes and hope Young Driver and JRM don’t score 16 and/or 24 points respectively.

Driver pairing Christian Hohenadel /Andrea Piccini are in exactly the same situation as Basseng/Winklehock as they are currently also on 101 points.

Hexis are in a slightly stronger position than the Lamborghini outfit in the teams’ standings. If Hexis can take two one-two finishes, they’d need Young Driver to score no more than 28 points, and they’d overhaul JRM no matter what the Nissans do as JRM would need 36 points to match them – and two third-fourth-placed finishes would only accumulate 34 points.

The nr47 DKR www-discount.de Lamborghini of Christopher Haase and Manuel Lauck started the second session of day where it had left off at the end of Free Practice at the top of the timing screens. It looked to be a Lamborghini party as the nr 37 and nr38 All-Inkl.com cars were also towards the top of the time sheets for most of the session. However the two cars from last year’s race winner’s Hexis AMR came to fore and ended the session in 1st and 3rd, with Andrea Piccini in the nr4 Aston Martin setting the fastest lap of the day with a 2:14.739 lap, 0.353 seconds ahead of Clivio Piccione in the nr3 car. The two Aston Martin’s were split by the nr 22 JRM Nissan of Richard Westbrook and Peter Dumbreck, with Dumbreck setting a best time of 2:15.052.

The nr47 Lamborghini finished the session in 4th place, with nr38 and nr37 All-Inkl cars in 6th and 7th respectively. Sumo Power Nissan’s were 5th and 8th with the nr40 Marc VDS Ford and the nr7 Young Driver Aston rounding out the top 10 cars.

Championship leaders Michael Krumm and Lucas Luhr could only manage 11th fastest, 1.099 seconds behind the lead Aston. However their nearest rivals for the championship Darren Turner and Stefan Mücke finished the session in 17th place after Mücke lost control of the nr8 Aston Martin when the car hit a bump at Turn 21, which launched the car into the wall, damaging the left hand side of the car. The Young Driver mechanics now face a long night to get the Aston Martin ready for the qualifying session at 9am tomorrow morning.