Ferrari North America will start its year-long 60th Anniversary celebration this weekend where it all began for The Prancing Horse – on a race track, surrounded by the spirit of competition. Ferrari teams and drivers will be out in full force at Daytona International Speedway, the official debut of the new TUDOR United Sports Car Championship (TUSCC).

The 2013 championship team Scuderia Corsa will compete in this weekend’s Rolex 24 at Daytona in the 458 Italia, the car which has also captured the last two GRAND-AM Rolex Series GT manufacturer championships. Not only is it the first race of the new series, but Daytona will also host the opening two rounds of the Ferrari Challenge Trofeo Pirelli. This action-packed spec series includes Ferrari clients from diverse backgrounds, all united through a passion for high-performance competition.

With enough historic victories and races at Daytona to fill many chapters, Ferrari North America will bring a special guest to help celebrate – the priceless Ferrari 250 GTO that won the Daytona Continental in 1964. Phil Hill and Ricardo Rodriguez drove the car, which was entered by Luigi Chinetti’s North American Racing Team, to victory that year ahead of two other Ferrari 250 GTOs. This GTO, chassis number 5571GT, was the first of only three Series II GTO’s built for the 1964 season. 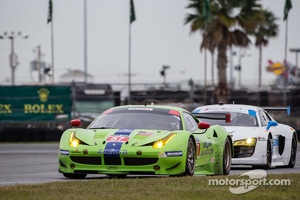 No less than seven Ferrari 458 Italias will take the green flag for Saturday’s Rolex 24 at Daytona in the GT-Daytona class. Scuderia Corsa, who with Alessandro Balzan claimed last year’s GRAND-AM Rolex Series GT driver and team championship, will bring three cars to the race. The no. 63 Scuderia Corsa Ferrari 458 Italia, which will be driven by Balzan and Jeff Westphal throughout the year, will also have Lorenzo Case and Toni Vilander for the Rolex 24.

Risi Competizione will continue to represent Ferrari in the GT-LeMans class. Matteo Malucelli and former Scuderia Ferrari F1 driver Giancarlo Fisichella will partner for the TUDOR Championship, and will be joined at Daytona by Gianmaria Bruni and Olivier Beretta.

“We are looking forward to a very memorable weekend in Daytona,” said Marco Mattiacci, President and CEO of Ferrari North America. “Being able to introduce Ferrari and motorsports enthusiasts to the rare NART Ferrari 250 GTO is the perfect way to honor our heritage here in North America as well as on the banks of Daytona. We’re just as pleased to kick off the 2014 racing season with another strong effort from Scuderia Corsa in GT-Daytona and Risi Competizione in GT-LeMans and an exciting field of over 30 cars and competitors in the Ferrari Challenge Trofeo Pirelli.” 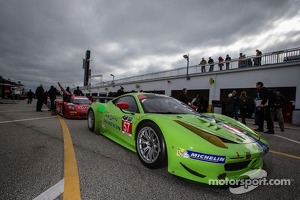