Daytona Beach, Fla. - Score one for the home team.

After thousands of hours of work and countless late nights, the effort that the Spirit of Daytona Racing squad has put in to be ready for the 2014 IMSA TUDOR United SportsCar Championship season was on display on Thursday as VISITFLORIDA.com pilot Richard Westbrook put the No. 90 Corvette DP on the front row for the Rolex 24 At Daytona. 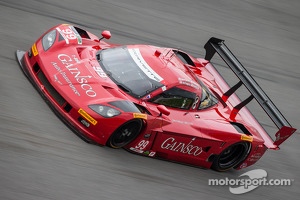 Westbrook’s fast lap time of 1:38.487 seconds will see him start alongside fellow Corvette DP driver Alex Gurney on the front row at the drop of the green flag on Saturday (FOX, 2:00 PM ET broadcast) in the team’s home event.

“I’m delighted! It proves we’ve got a quick car,” said Westbrook, who has three DP victories to his credit with SDR. “I’m delighted to be going into this race on the front row with VisitFlorida.com on the front of the car, it couldn’t be better. (smiles) Well, the pole would have better, but the front row here at Daytona- I’m really happy!”

After a setback in testing saw the team have to build an entirely new Coyote-based Corvette DP in time to be ready for testing, the group has continued to build confidence ahead of 2014 as some experienced hands have been joined by some new faces.

“I’m not disappointed at all with our qualifying, I’m very happy,” said Flis when asked if not getting the pole was a disappointment. “I think we did a good job and this race is 24 hours long. I think everyone on the team has done a great job so far. We gave what we had and I think the No. 99 car was just a little bit quicker than us today, and it could have been at this track that he just got a good tow.

But I’m happy with the front row here in Florida and the weather is beautiful. So we are going to go after it in the race. I think we have a good car for these three pro guys and now we are just looking forward to the race.”

The race marks the first-ever event for the IMSA TUDOR United SportsCar Championship and is the first of a 11-round championship battle, one that the team is looking to kick off with a solid result on Sunday.

“It’s the first time for me in DP going into this 24-hour race knowing that we’ve got a car that we can definitely fight for a win,” said Westbrook, who has taken a Rolex 24 DP podium. “So, we’ve got to do all the other things right now: preparation, reliability, pit stops.”