Patrón Endurance Cup returns for round 3 at Watkins Glen

Through two events – and 36 hours of competition – the Patrón Endurance Cup has lived up to its billing as a true “endurance” championship.

DAYTONA BEACH, Fla. – The Tequila Patrón North American Endurance Cup is back in the spotlight this weekend as the TUDOR United SportsCar Championship heads to Watkins Glen International for Sunday’s Sahlen’s Six Hours of The Glen (FOX Sports 1, 11 a.m. ET).

Through two events – and 36 hours of competition – the Patrón Endurance Cup has lived up to its billing as a true “endurance” championship, one that spans the four longest races on the TUDOR Championship schedule and a total 52 hours of racing. In addition to January’s Rolex 24 At Daytona, March’s Mobil 1 Twelve Hours of Sebring Fueled by Fresh From Florida and this weekend’s Sahlen’s Six Hours, the Patrón Endurance Cup closes with the 10-hour Petit Le Mans powered by Mazda at Road Atlanta on Saturday, Oct. 4.

The Rolex 24-winning No. 5 Action Express Racing Corvette DP team holds a slim one-point lead in the Prototype class (P), with the top-five teams separated by a mere three points. Joao Barbosa and Christian Fittipaldi lead the driver standings heading to The Glen, one point ahead of Chip Ganassi Racing with Felix Sabates driver Sage Karam (23-22).

Karam drove Chip Ganassi Racing’s No. 02 entry at Daytona and Sebring with IndyCar drivers Scott Dixon and Tony Kanaan, but will join Scott Pruett and Memo Rojas in the No. 01 Telcel Ford EcoBoost/Riley this weekend.

Ford has won four of the seven segments to date to lead the P-class manufacturer points by one point over Chevrolet (29-28).

Competition also is very tight in the GT Le Mans (GTLM) class, with six teams and four manufacturers separated by six points. Porsche North America’s Nick Tandy and Richard Lietz – drivers of the Rolex 24-winning No. 911 Porsche 911 RSR – take a one-point lead in the driver competition to The Glen, over the No. 4 Corvette Racing Chevrolet Corvette C7.R and co-drivers Oliver Gavin and Tommy Milner (23-22).

Porsche leads the GTLM manufacturer standings over Chevrolet (30-25) largely due to victories in each of the first two Patrón Endurance Cup events. One race after Tandy and Lietz co-drove to victory in the Rolex 24, Porsche North America’s No. 912 entry followed up with a win at Sebring with co-drivers Patrick Long, Michael Christensen and Joerg Bergmeister.

Teams in the Prototype Challenge (PC) and GT Daytona (GTD) classes will be looking to gain ground at The Glen, with CORE autosport and AIM Autosport off to a solid start in the respective categories. 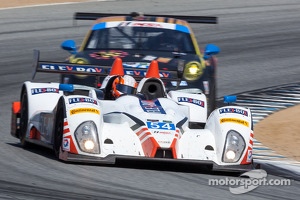 Jon Bennett and Colin Braun won at both Daytona and Sebring to take a seven-point lead over 8Star Motorsports and driver Tom Kimber-Smith (31-24) in PC competition.

In GTD, Townsend Bell and Bill Sweedler dominated the Rolex 24 and won a segment at Sebring to hold a 12-point lead over Magnus Racing and drivers Andy Lally and John Potter (30-18). Marco Seefried is second in the GTD driver standings with 21 points, but is not expected to drive at Watkins Glen.

At Watkins Glen, Patrón Endurance Cup points will be awarded in two segments. Leaders in all four TUDOR Championship classes receive five points at the three-hour mark and the finish. Teams running second in each class are awarded four points at the end of each segment, with three points for third and two points for all remaining competitors.