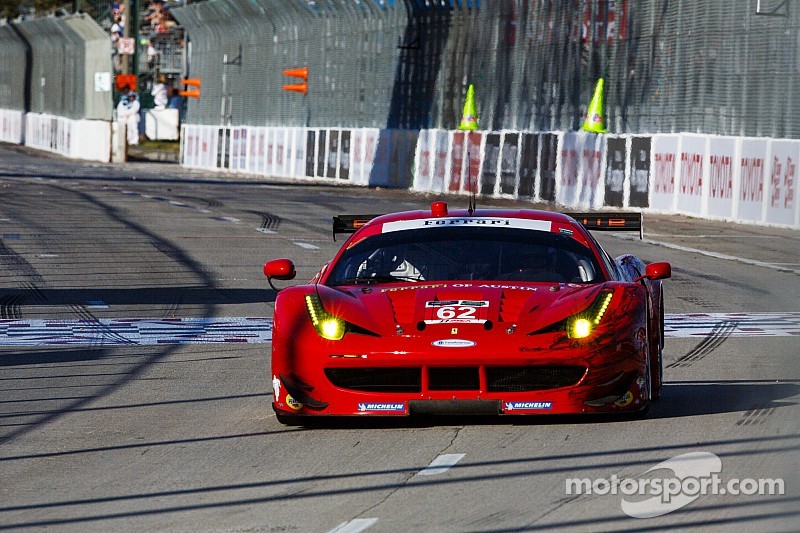 After quick repairs and bodywork replacement to the Ferrari 458 Italia, Giancarlo Fisichella was able to clock a time of 1:17.709 for the third position on the grid.

Long Beach, California - The No. 62 Risi Competizione Ferrari team experienced a bit of drama just before the start of the 15-minute qualifying session for the Tequila Patrón Sports Car Showcase race today in Long Beach, Calif. Giancarlo Fisichella of Rome, Italy, brushed the wall at Turn 9 of the 11-turn, 1.968-mile street circuit on the final lap of Practice 2, which proceeded qualifying.

The Risi Competizione crew worked feverishly during the 10-minute break between Practice 2 and qualifying to make a few quick repairs and bodywork replacement to the Ferrari 458 Italia. Fisichella began his qualifying session with just eight minutes remaining in the 15-minute session and was able to clock a time of 1:17.709 for the third position on the grid, still under the previous qualifying track record.

Obviously BMW looks pretty quick, but I think we can fight them for the podium.

The Risi crew replaced the wing/rear deck, rear bumper and mirror, including collecting body parts from the Risi Transporter stationed in the IMSA Paddock located on the other side of the circuit.

Fisichella was the fastest driver in the morning practice session and second fastest in Practice 2. Teammate Pierre Kaffer drove in both the morning and afternoon practice sessions as the team completed set up for the ever changing conditions on the circuit.

The Houston, Texas based Risi Competizione Ferrari F458 Italia is the only Ferrari and one of eight entries in the very competitive GTLM field. There are a total of 18 cars entered for the 100-minute race on the streets of Long Beach.

Giancarlo Fisichella, qualifying driver, No. 62 Ferrari F458 Italia: "Considering what happened ten minutes before the end of the last practice session, the qualifying session was great, and considering the damage to the bodywork.

Thanks to the guys, they did a fantastic job on the spot. The car was not perfect and probably some additional repairs need to be made. It looks promising for tomorrow.

Rick Mayer, race engineer, No. 62 Ferrari F458 Italia: "Qualifying didn't go as planned, mainly because we had an accident in the second practice. It did more damage than we were able to repair in pit lane so qualifying was quite difficult for Giancarlo.

The BMWs were fast, in fact, they've always been fast here. They got a restrictor break this year on the BoP (balance of performance). I expected them to be quick but I thought the Corvettes would have been quicker. This is (Bill) Auberlen's home track so it's expected here. He's probably been coming here for 40 years."