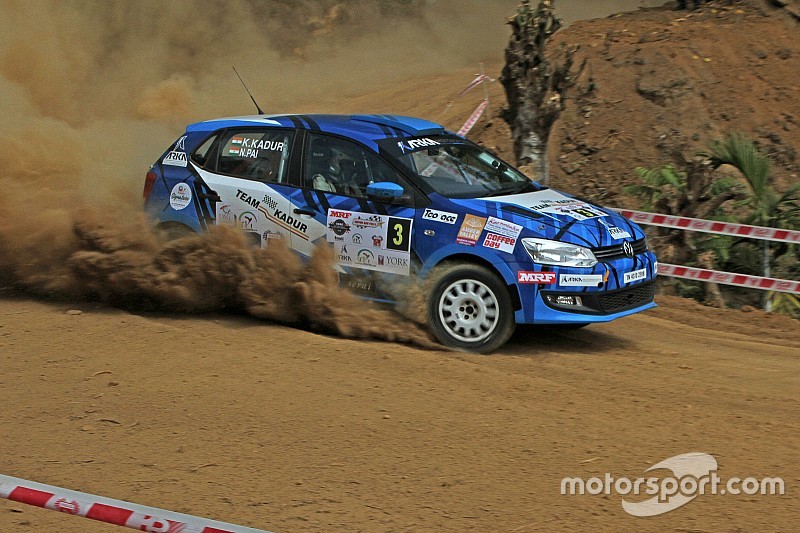 Karna Kadur moved into the lead of the Chikmagalur round of the Indian National Rally Championship after overnight leader Gaurav Gill suffered an unfortunate retirement in the final stage of Saturday.

Mahindra Adventure driver Gill had built up a comfortable gap when the lower arm of his factory-built Super XUV500 broke during SS6, forcing a second successive INRC retirement.

The New Delhi-based racer will be allowed to return tomorrow under Super Rally format to salvage some leg points, but faces an uphill battle to defend his crown.

“A bad day in the office,” Gill concluded after Saturday’s leg. “We had a good morning, winning all the Stages, but on the fifth Stage, we had an issue with the lower arm with the ball joint completely shearing off.

“A case of metal fatigue perhaps. We are driving tomorrow and take whatever points we can and stay in the championship. So, maximum attack tomorrow.”

Gill’s retirement allowed Kadur to seize the lead in his customer Volkswagen Polo and he heads to Sunday with a sizeable 59.7s advantage over his nearest rival Bopiah.

“I think the day went pretty well and we got more than what we bargained for. We were concentrating only on our category (INRC-2),” he said.

“In the Super Special Stage, we were the quickest in our category and so we knew how we wanted this rally to be. We took one Stage at a time.

“We trailed Gaurav (Gill) by 20 seconds after the first Stage today and so, we pushed in the next, and improved. In the process, we got past (Amittrajit) Ghosh which was part of our strategy.

“Unfortunately, Gaurav packed up as he was our benchmark. Tomorrow, we will try to keep our position as we have a comfortable lead.”

Amittrajit Ghosh in the other factory Mahindra holds the third spot after what he described as the “toughest drive of my career”.

Ghosh picked up a shellfish allergy on his flight from London, where he is based, and was also battling breathing problems during the rally.

“I couldn’t push to my limit,” he admitted. “I am just forcing myself to drive. I am not looking at the timings and if we can make a place tomorrow, then we will.

“Even as I am talking now, I am gasping. I have not had any solid food the whole of this week.

“Tomorrow, I will drive at the pace I am comfortable with and take whatever points I can from this Rally.”

A total of 11 drivers retired from the rally on Saturday and the final stage of the day had to be cancelled after Aroor Vikram Rao crashed, blocking the track.

The Coffee Day India rally, as it is called for sponsorship reasons, concludes on Sunday near the coffee estates of Chikmagalur.