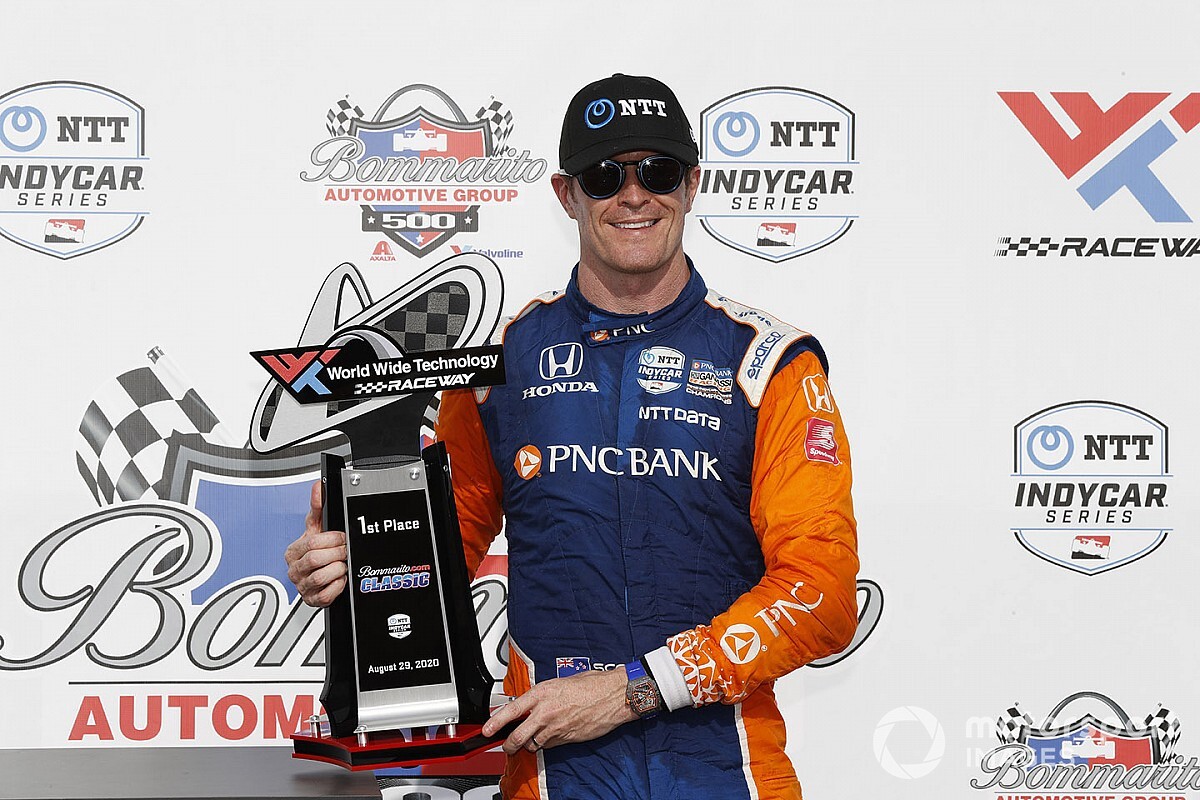 Chip Ganassi Racing's Scott Dixon staved off Rahal Letterman Lanigan’s Takuma Sato at Worldwide Technology Raceway’s first race of the double-header to score his 50th win in Indy cars, his fourth of the season and extend an already-commanding points lead.

As Team Penske-Chevrolet’s polesitter Will Power and fellow front-row starter Pato O’Ward of Arrow McLaren SP-Chevy came down towards the green at the start there was chaos in the midfield, as Alex Palou’s Dale Coyne Racing with Team Goh car jumped out of line while still under yellow, Simon Pagenaud did the same in his Team Penske-Chevrolet but both remained at yellow-flag pace.

Behind Pagenaud, however, the other Arrow McLaren SP car of Oliver Askew moved in the same direction but accelerated into the back of the Penske, spinning it into Alexander Rossi’s Andretti Autosport-Honda. Behind, Marco Andretti came off the gas to avoid Rossi and was rammed by Zach Veach. On the spot, three Andretti cars were eliminated, as was Ed Carpenter.

Carpenter pitted for extensive repairs, Pagenaud and Askew pitted for a new front wing, while Charlie Kimball, Graham Rahal, Tony Kanaan and Santino Ferrucci stopped in order to go off strategy. Pagenaud would return to the pits to have his car checked over again, in particular to check for rear-end damage where Askew had struck him.

Askew and Palou were sent to the back of the grid as penalty. Pagenaud would thereafter be struggling with an inability to perform full throttle upshifts.

The restart after 13 laps saw Power and O’Ward pull away cleanly, but Dixon made a slight error coming onto the back straight and lost momentum but retained third ahead of teammate Marcus Ericsson, Meyer Shank Racing’s Jack Harvey who made a bold outside pass on Penske’s Josef Newgarden, while the Andretti Harding Steinbrenner-Honda of Colton Herta got ahead of Sato.

Power had pulled a one-second lead on O’Ward when he came up to lap Pagenaud on Lap 33. He lost a few tenths but the gap remained 0.7sec as the struggling 2016 champion respectfully pulled out of the way for all the top runners before pitting off-strategy on Lap 37.

Behind O’Ward, Dixon and Ericsson ran half a second apart, the Swede just under a second clear of Harvey.

Pagenaud’s re-emergence ahead of the quicker runners gave Conor Daly in the Carlin-Chevy his opportunity to get a run on Sato to claim eighth place on Lap 52, while Hunter-Reay ran 10th, one second down.

Newgarden was the first of the front runners to blink, pitting on Lap 61, with O’Ward doing the same next time by, and Power one lap after that. Crucially, the erstwhile leader emerged behind O’Ward who had done a stronger in-lap and Dixon’s later stop saw him too emerge ahead of the #12 Penske.

Thus once the first scheduled stops had been completed, O’Ward led Dixon by 1.2sec, Dixon led Power by 1.6 and Harvey ran fourth close behind Power and with Newgarden and early-stopping VeeKay in sixth. Ericsson had fallen to seventh, just ahead of Herta, Daly and Hunter-Reay.

After 66 laps, Pagenaud was waved off by Race Control for being unable to run with 105 percent of the leaders.

VeeKay pulled out of sixth to make his second stop on Lap 98, while Newgarden stopped again on Lap 100, Power on 101 and Hunter-Reay on 103. The earlier stop worked well for Newgarden, pulling out ahead of Harvey who was also now behind VeeKay.

Out came the caution flags on Lap 108 for smatterings of rain. With the race distance set at 200 laps, that meant that if the race was called, O’Ward would be the winner. Because World Wide Technology Raceway is such a short oval, the early stoppers were a lap down to the leaders, Power, Newgarden, VeeKay, Harvey, Daly and Hunter-Reay circulating in 12th through 17th.

On Lap 116, the pits opened and O’Ward’s crew just got their man out ahead of Dixon, with Ericsson and Felix Rosenqvist up into third and fourth. Herta, Sato, Tony Kanaan, Kimball, Santino Ferrucci, Palou and Askew would also be restarting ahead of Askew, Power, and co. Thus there was little to lose for them to go grab another splash of fuel. Newgarden’s crew got their man out ahead of Power, both of them ahead of Askew, Harvey and Daly.

The Lap 122 restart saw O’Ward cleanly hold off Dixon, with Ericsson third but Rosenqvist falling away after a wild sideways moment just after Herta passed him on the outside. That allowed Ferrucci, Sato, Kanaan, VeeKay to get ahead.

Further back, Power was up to 11th after passing Newgarden, Hunter-Reay and Palou, but after a couple of failed attempts to get past Kimball, he pulled in on Lap 135, with a right-rear puncture and resumed in 17th, one lap down.

Askew, VeeKay, Hunter-Reay, Harvey and Daly made their final stops just past the Lap 150 mark. When Herta and Ferrucci stopped, the Dale Coyne Racing with Vasser-Sullivan car’s right-front tire changer had finger trouble and lost him time.

Meanwhile Herta emerged just in front of Ericsson, while on Lap 164, O’Ward and Dixon stopped together and this time Ganassi #9 crew got the five-time champion out ahead.

Once late stoppers Sato, Kimball, Palou and Newgarden made their stops between Laps 171 and 175, it left Dixon leading O’Ward, but Sato – despite a right-rear wheelnut issue – emerged in third, ahead of Herta, Ericsson, VeeKay, Hunter-Reay, Rosenqvist, Power, Daly and Harvey.

Sato, perhaps realizing how he had possibly just lost a chance to resume in the lead, stormed after the top two and on Lap 180 he passed O’Ward around the outside of Turn 1, in a hard but fair effort. The Mexican lost momentum and quickly fell to five seconds down as Sato went hurtling after Dixon, the man he beat to the Indy 500 win.

With 12 laps to go, the RLL car was less than 0.4sec behind the Ganassi machine. There the gap held steady as Sato wrestled with turbulent air, but in his favor were tires 13 laps fresher.

As the pair approached traffic, Dixon slowed, Sato gained, but it wasn’t enough and the Ganassi driver scored his 50th IndyCar victory, and his fourth of the season. It was hardly consolation for missing out at Indy, but it stretched his championship lead to 117 points.

VeeKay did a fine job to clock sixth ahead of Hunter-Reay, Rosenqvist salvaged eighth, while Kanaan held off Daly for ninth.