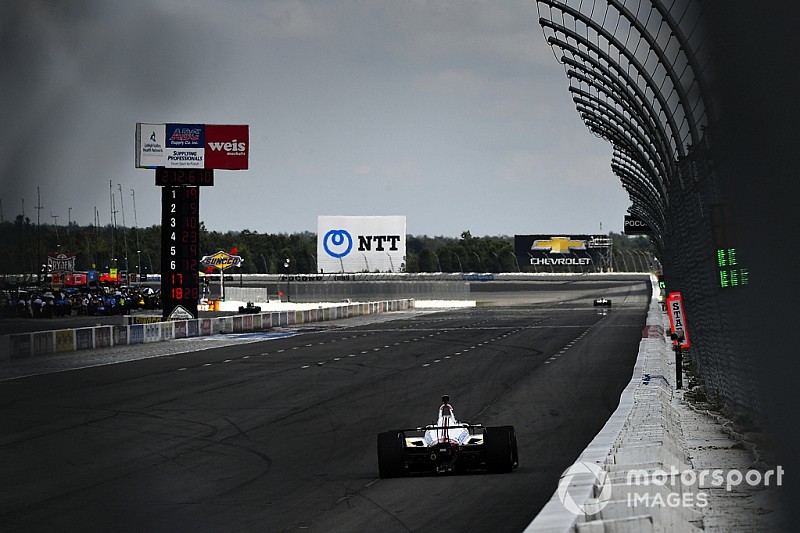 The top three finishers in Sunday's ABC Supply 500 hope that the NTT IndyCar Series continues to visit Pocono Raceway despite another shunt that saw a car in the fence on the opening lap for a second straight year.

A collision between Takuma Sato, Alexander Rossi, Ryan Hunter-Reay, James Hinchcliffe and Felix Rosenqvist saw Sato’s Rahal Letterman Lanigan Racing-Honda come to a halt upside down, while Rosenqvist’s Chip Ganassi Racing-Honda was flicked up into the fence and rode on top of the SAFER barrier before coming down on its wheels on track.

All five drivers went to the track’s infield medical center and while four were swiftly cleared to drive, Rosenqvist was taken to hospital for extra precautionary checks before he too was cleared.

Robert Wickens, whose career has been halted by injuries incurred in a Lap 1 shunt at Pocono last year, said that IndyCar has a “toxic relationship” with the 2.5-mile tri-oval while Max Chilton, who recently quit ovals, and Indy 500 regular Sage Karam agreed that the series shouldn’t be there.

At a time when IndyCar’s deal with Pocono Raceway is up for renewal, the timing of the latest accident – and the poor weather that deleted qualifying and brought the race to an early end – could be seen as very unfortunate.

However, runner-up Scott Dixon, race winner Will Power and latest Indy 500 winner Simon Pagenaud defended the track’s reputation and hope it remains on the schedule.

“Honestly, I feel bad for Pocono,” said Dixon who won the 2013 IndyCar race here, after its 24-year-hiatus. “The group of people here that work, they work extremely hard. I felt the crowd today at the start of the race was fantastic. It was gaining some really good momentum. Hopefully it does continue.

“But down to weather, some mistakes that have happened on track… honestly they could happen anywhere. If you look at Justin [Wilson, who was killed by flying debris at Pocono in 2015] or Robbie [Wickens], those can happen anywhere. I feel bad that it gets a bit of a bad taste in that scenario. I think the drivers in a lot of situations can do a better job to help that situation.

“Honestly, I hope we come back. I just want to say a big thank you to everybody here at Pocono, the fans and everybody that come out, because it's definitely a tough place.

“Will can tell you how rewarding it is to win here just because it is so difficult to get it right.”

Power, who has won three of the last four IndyCar races at Pocono, said: “I agree, it's a great oval for us. Obviously some unfortunate accidents here, but like Scott said, they could happen anywhere. Kind of got a bad rap for that.

“The crowd is up 15 percent every year we come back. It's getting better. Like Scott said, the crowd was great today.

“It's a good racetrack, man, a good track for racing. I really hope we come back. I think the guys do a great job. It’s a cool track for us… It's hard for us to find good ovals these days that suit our cars.”

Pagenaud, who dominated the first half of the race, added: “Tough to add to that. I think they said it all. It is a fun track to drive on. Real unfortunate, close to New York, a great market for IndyCar. It's an opportunity to bring people from New York to Indy car races.

“Personally, I love superspeedways… Obviously when you're traveling at such high speed, you know a crash is going to be a big crash.

“Hopefully we can come back and hopefully we can keep working with the people at Pocono because it's been a lot of fun. I've been racing here since 2013 in the series. I've enjoyed it more and more every year. So we'll see what happens next. As a driver, I really enjoy coming here.”