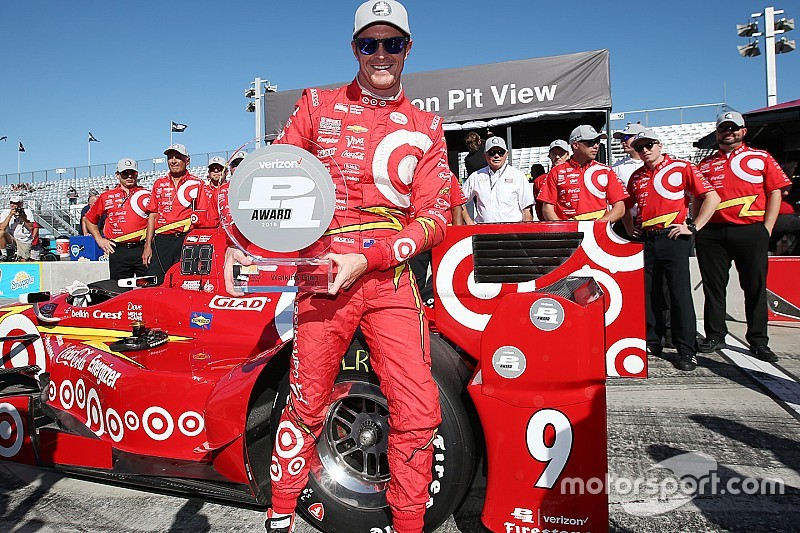 Scott Dixon grabbed a predictable pole but in an unpredictable way, as he set his fastest time – and a new track record – on the harder compound black tires. Behind him however, there were several incidents that caused penalties.

The Chip Ganassi Racing driver set a 1min22.5259sec lap, over five seconds under the old IndyCar track record set in 2009. But it was a close-run thing as Team Penske-Chevrolet’s Will Power came within 0.0483sec of toppling the #9 car him from top spot. It was Dixon's second pole of the season and 25th of his career.

Power was somewhat fortunate to have made it to the Firestone Fast Six, as the red tires weren’t providing enough grip in the track conditions, and Penske cars seemed hardest hit. He ended Q2 in seventh.

However, Mikhail Aleshin, who had appeared to reach the top six, had his fastest two laps deleted for interfering with Juan Pablo Montoya’s qualifying run, which allowed Power to move forward. Penske took full advantage, put Power on blacks, and he rediscovered his speed.

Championship leader Simon Pagenaud was a disappointing seventh, and will start alongside teammate Montoya, with Jack Hawksworth an impressive ninth for AJ Foyt Racing, the top Honda entry. Aleshin was a disgruntled 10th, rookie RC Enerson a deeply impressive 11th for Dale Coyne Racing, and Josef Newgarden a subdued 12th.

Takuma Sato will start last after having his best two laps deleted when he crashed at the end of Q1 and brought out the red flag.