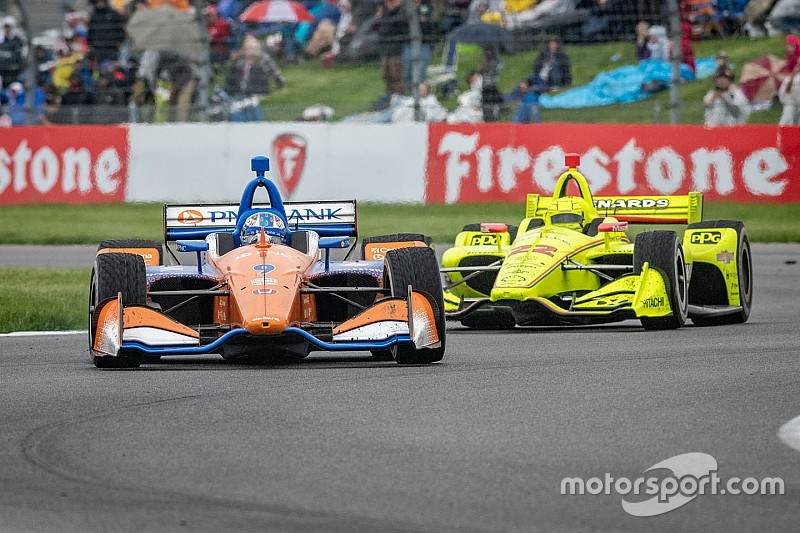 Chip Ganassi Racing’s Scott Dixon and Felix Rosenqvist were left puzzled by a lack of grip that killed their chances of winning on the Indianapolis Motor Speedway road course, after starting from the front row and leading 54 of the IndyCar Grand Prix’s 85 laps.

Rookie Rosenqvist, starting from his first pole position in the NTT IndyCar Series, made a strong start and led the first 15 laps but fell to fourth following the second restart, struggled on his second set of (used) alternate-compound Firestones and had to pit early for a set of primary compound tires. In the final stint on wet tires, he came back from 12th to claim eighth.

Dixon, by contrast, made a poor start and dropped to third, yet a brilliant first restart to claim the lead. He remained the leading on-sequence driver, with 39 laps led, until a lack of front tire grip in the wet made him easy prey for winner Simon Pagenaud, who passed him on the penultimate lap.

Said Dixon: “The Firestone red tires – I never got to the blacks – had a ton of grip and it was a lot of fun. The second stint, where we ran our [twice-used] reds, we kind of fell off a bit of a cliff, and then once we got to our sticker [new] set we kind of set sail again.

"Then in the rain… I don't know if we changed the front wing or whatever we did in that pit stop, but we just had no front grip and had to stop the car too much to really keep time. We were talking a lot about whether it was going to be a time race or it was going to run the full distance, and obviously it went the full distance. A lap or two shorter would have helped…

“I think at the end of the last stint there, we were probably hoping that it rained a lot harder just for being selfish for ourselves to help the front tires. I just couldn't turn.

"Even in the first gear corners I was almost having to stop the car to get it to rotate. I think it felt like I needed probably another four or five turns of front wing.

“Sometimes it kind of goes like that, depending on how your mechanical balance is, and a lot of the cars I think are very different. Some may have switched to a semi-wet setup, I think, for predictions going later on into the race. But yeah, whatever the balance was, we … had fantastic traction, but as you saw in all the slow speed corners, I just couldn't turn the car."

Dixon said that once he was made aware that Pagenaud had gotten around Meyer Shank Racing’s Jack Harvey for second place, he knew his own five second lead would come under threat.

“I think Harvey was having a similar issue with his balance and struggling, and that was kind of holding Pagenaud back," he said. "But they were giving me lap times, and you could see that the #22 [Pagenaud] just had some pretty immense pace. Once I knew he got some clear track and once he got past Harvey, I think it only took two laps before he was on top of us.

“In a situation like that – we had it in the second stint on reds, too – where you start to fall off, it falls off really fast here. It's a momentum track. So I knew pretty early that we were going to be struggling.

“I think we had a pretty big advantage on the slick tires over the #22 for sure. The stint we got caught [before] was when we ran the double-run reds – we started with nine laps on those. Once we got to those sticker reds, that portion right before it rained, we kind of stretched out pretty easily and didn't really have to push.

“When it comes to the rain, you know, you're kind of in the window or you're not, and they were. It can be a multitude of different setup options that make that possible. Ultimately it just didn't play out.”

Rosenqvist, whose car twice caught fire during pitstops due to spillage from the refueling hose, stated: “It was a mix of bad timing on some things, we had some bad luck, and some errors here and there. I think the main point for us was that we were still having issues with degradation, mainly on the red tires. We just dropped massively and we had to go short on the second stint on reds.

“That set us up badly for the rest of the race. I don’t know why it’s happening but it’s something we are looking into. I feel like we should have had a much better result today. On the wet tires for the final stint and I think we managed to get four or five guys in the end and wound up P8. It was a good salvage of points and we did recover a lot. At the end of the day we can be happy with that.

“But overall I’m very disappointed and I feel like we gave away something, which was likely a podium today for the NTT DATA car.”

Dixon lies second in the championship, six points behind Josef Newgarden and 30 ahead of Alexander Rossi. Rosenqvist is only 11th, but leading the Rookie of the Year standings, ahead of Colton Herta by 11 points. 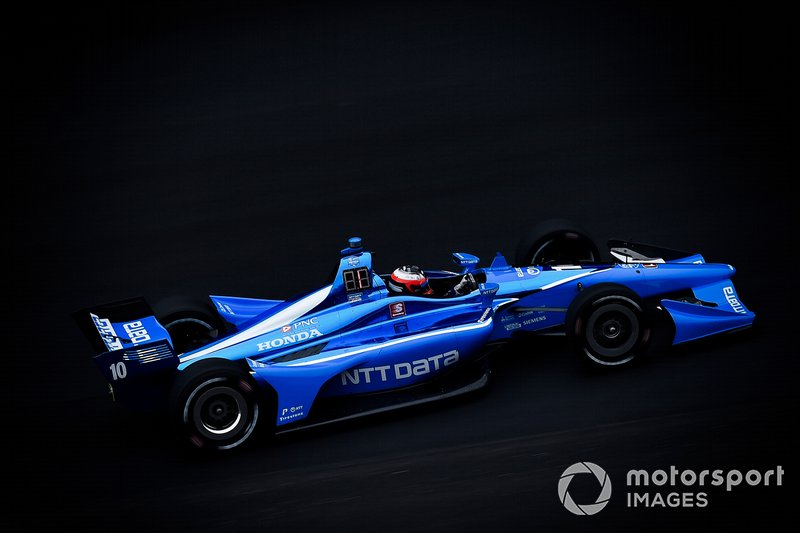 Pagenaud: “It was incredible to see the pace we had in the rain”