Hildebrand may be down, but not out. The talented young driver will be back in the Indy Car series sooner rather than later.

As usually happens when someone loses their job there has been speculation about who was at fault and what was the final straw.

Hildebrand's critics point out that J.R. failed to bring home the win for Panther Racing at the 2011 Indianapolis 500--rather, he put the car into the wall on the last turn of the last lap on Memorial Day. Nor has J.R. won a race since his first Indy Car race in 2010, with a disappointing total of 5 top-five finishes over 39 starts.

There has been speculation that perhaps the set-up on Hildebrand's car for the 500 this year was not to his liking, and contributed to his Lap 4 exit from the biggest race of the year. Some have speculated that driving at Panther Racing for team CEO John Barnes may not be a bed of roses. 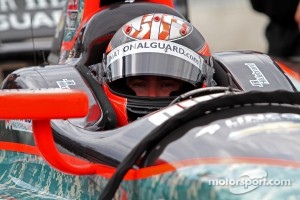 There's an old joke that seems appropriate here: Which came first? The chicken or the egg?

Did Hildebrand's relative lack of success at Panther reflect mediocre talent, or was a mediocre car the cause?

Panther Racing has been home to several outstanding driving talents: Sam Hornish Jr. won two series championships there. Dan Wheldon and Scott Goodyear fielded cars for the team during their driving careers. Hideki Mutoh drove to an outstanding Freedom 100 victory at Panther in 2007, and Mark Taylor won the Indy Lights Series championship there.

The team has an unprecedented string of second-place finishes in the Indianapolis 500 from 2008 to 2011, most of them with veteran Vitor Meira behind the wheel.

Barnes has earned the Louis Meyer Lifetime Achievement award from Indianapolis Motor Speedway, in recognition of many years of toil at open-wheel racing. He and his family have been at the forefront of efforts to improve Indiana's schools at the elementary education level. For a while, Lincoln Tech was a sponsor on a Panther car--a special treat for Barnes who actually attended the technical school and has helped promote it from time to time.

In his third year of Indy Car racing Hildebrand has accumulated almost as many championship points as proven winner Dario Franchitti has achieved. A top five finish at Long Beach stands as his best accomplishment of the young season. By all appearances J.R. seems to have recovered fully from the torn ACL he suffered at Texas last season.

Hildebrand qualified his car on the inside of the second row at Indy this year. He looked set for a solid run in the race, until his ill-timed early-lap spin and collision with the wall that left him dead last in the race. 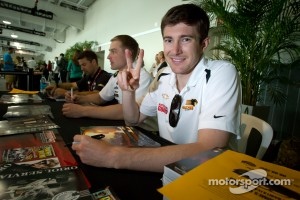 No doubt it was tough to face an owner and team for the second time in three years with a disappointing conclusion to the Indianapolis 500. No doubt it was a long afternoon in the Panther garages watching from the sidelines as less talented drivers and lesser one-off equipment moved around the oval at speed.

He's a very sincere, plain-spoken young man who's given a decent accounting of himself, on and off the track, in Indy Car since moving into the series full-time in 2011. Of particular note, Hildebrand has distinguished himself by his dedication and service to the National Guard, the primary sponsor of his car.

The singularly deflating "Bill Bruckner moment" in the 2011 Indy 500 will diminish J.R.'s resumé as a driver until the day he retires from racing, or he wins the Greatest Spectacle in Racing. But it shouldn't define a promising young driver's career, and it won't, when Hildebrand inevitably returns to the series with another chance and another team.

Franchitti quick in Detroit, field set for race one