Ricardo Juncos says that this weekend’s Circuit of The Americas race remains his team’s only confirmed IndyCar event, although he has potential sponsorship deals for at least three more races, while he also continues the search for a second IMSA full-timer.

One of the star junior formula teams of the past decade, Juncos Racing made its IndyCar debut with a two-car effort in the 2017 Indy 500, and last year ran a single entry at 12 of the 17 rounds, driven by its team’s 2017 Indy Lights champion Kyle Kaiser, Rene Binder and Alfonso Celis Jr.

However, the team’s planned expansion to two cars for 2019 – albeit run again on a part-time basis – proved overly ambitious, and thus far Juncos can’t guarantee any IndyCar outings beyond the COTA race on Sunday.

“Right now it depends on what more we can add with the sponsor we currently have,” Juncos told Motorsport.com. “So I think we’re going to do the Indy 500 but I don’t know 100 percent yet.

"That would be with one car… well, maybe with two, but I think one would be better because there are so many things going on with the team.”

“After Indy, I think Toronto and Laguna Seca are the events we can do, sponsorship-wise," added Juncos. "Anything more than that, we have to work on it – we shall see.

“We can focus a lot on the sponsorship now that IndyCar is going to be broadcast in South America through the website, but now we need to get the commentary in Spanish.

"Everything like that can help us to find companies from my home country [Argentina].”

Although Juncos entered the Rolex 24 at Daytona with Kaiser, Binder, Argentine touring car and GT star Agustin Canapino and full-timer Will Owen, and retained the latter trio for the Sebring 12 Hours, he’s still hunting for a second full-timer.

“So we’re talking with a few drivers, but the sponsorship situation is still a problem because I still don’t have a team sponsor for that program. And it’s been difficult for us with the problems that we’ve had at Daytona and Sebring with some components in the car, things that were out of our hands. We had some problems with the throttle system and hopefully we can find a solution.”

Asked if Canapino – one of the stars of Daytona given his rookie status at this level – might switch to IMSA full time, Juncos replied: “I don’t think so because we couldn’t find any sponsor for him from Argentina. It’s a shame, because he’s a great driver, very talented.

“But he needs to work on his physical condition big time. Prototypes are totally different from what he’s used to and he needs to move and go to the gym. At Daytona he was very impressive, but at Sebring not so much because it is a much more physical track.”

On the subject of General Motors Argentina possibly supporting Canapino racing in the U.S., Juncos said: “In IMSA, no, because Cadillacs aren’t sold in Argentina.

"It would be more likely to support him in IndyCar because he races Chevrolets in Argentina and we run Chevrolet engines in IndyCar. But again, if he’s not physically ready for IMSA, IndyCar will be an even bigger struggle.

“I mean, I would love to move Agustin to the U.S., run him in IMSA full-time and prepare him for IndyCar, but that is a long process, and a long way from reality right now.” 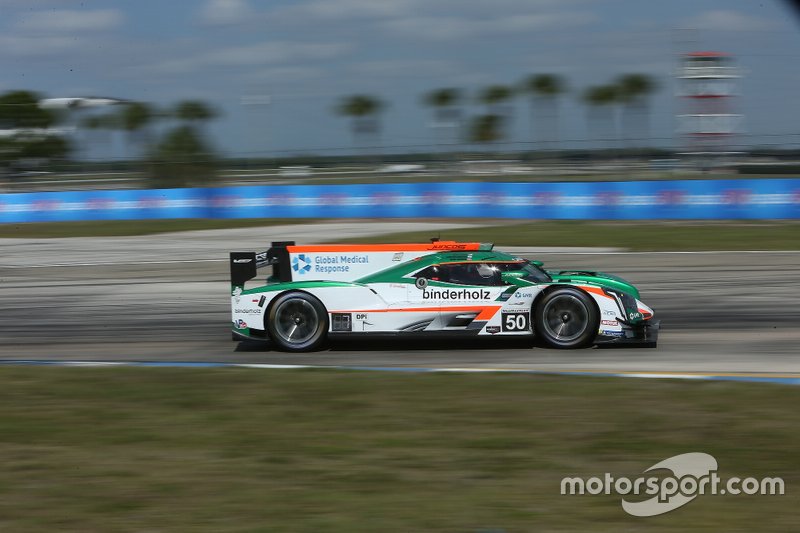 Ilott “in discussions” over IndyCar switch in 2022