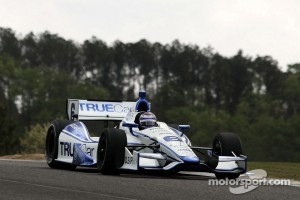 Legge, driver of the No. 6 TrueCar Lotus Dallara DW12, started 24th but had difficulty advancing much further throughout the 90-lap event. A lack of test time has put her and her team at a distinct disadvantage, and thus Legge and Dragon Racing have been experimenting (more than what is normal during a race) with tires, tire pressures and bar settings to optimize the car.

“We’re learning about the car during races,” said Legge. “When I got in a gap, our lap times were pretty comparable with everybody else, which means that we’re improving. But I don’t think we are up to speed yet. We need another couple of races or at least have some testing like everybody else out there.”

Legge suffered from traction issues for much of the race – won by Will Power, last year’s defending race winner – but the team was ultimately able to find a good setup for the car. Unfortunately it was not enough to make much of a difference in the race as by that point Legge was no longer on the lead lap.

“One time we got it right – on the red (tires) – but the problem was because everyone pitted really late, the first set of tires were completely shot (by that time),” said Legge. “Then I had to get off-line to let a car pass, so I went into the marbles and then it would take a half a lap to clear them up. By the time they were gone another car would go past and it was back into the marbles so it was a complete disaster. In the middle of the race – for about 10 laps – we were okay and then we tried something else with the next set of tires. So again we had entry oversteer and traction problems at the rear of the car. But we at least learned something.”

Legge’s TrueCar Racing teammate Ashley Freiberg, made several late-race passes in both Star Mazda events (22 laps each) she competed in. She was able to advance her #91 Star Mazda three positions in the first race (from 14th to 11th) and two in the second race (from 14th to 12th). The first race was won by Jack Hawksworth, and the second – which was rescheduled from Friday because of rain – was taken by Martin Scuncio. Freiberg was fairly pleased with her performance but is hoping for better the next time around.

“I didn’t get the best start on the second race so I fell back a couple of positions,” said Freiberg. “I had the same strategy for both races, though, which was to try and keep my tires as good as I could for as long as I could. I was battling pretty good with Carlos (Linares). I had good entry speed but he would have good exit speed so neither of us really had much on the other. Basically the whole race I was strategizing on how to get around him and then on the last lap I did.

“This track is really tough on tires and they fall off quickly,” stated Freiberg. “I did the same for the first race, hoping others would wear their tires out before me. My car was oversteering at the beginning of race one, which burned out the rears fairly quickly, so we worked on mitigating that for the afternoon event.”

Freiberg gets a break (but will test in the coming weeks) as the Star Mazda series does not run again until May 25-26 at Lucas Oil Raceway near Indianapolis. However, Legge must jump back into it as she goes with the IZOD IndyCar Series to Long Beach, where she has had considerable success – one win in the Toyota Atlantic Series in 2005 and two top-ten finishes there (in Champ Car) in 2006 and 2007.

“I feel better going into Long Beach,” said Legge. “I know that track; I didn’t know St. Pete or Barber so I feel a bit more confident. I also feel a little bit more convinced that we’ve learned a more about the car and I’ve gotten to know it a little better. But I still don’t think that we’re anywhere near where we should be. The team is doing everything in their power to get where we need to be, but it will take time.”