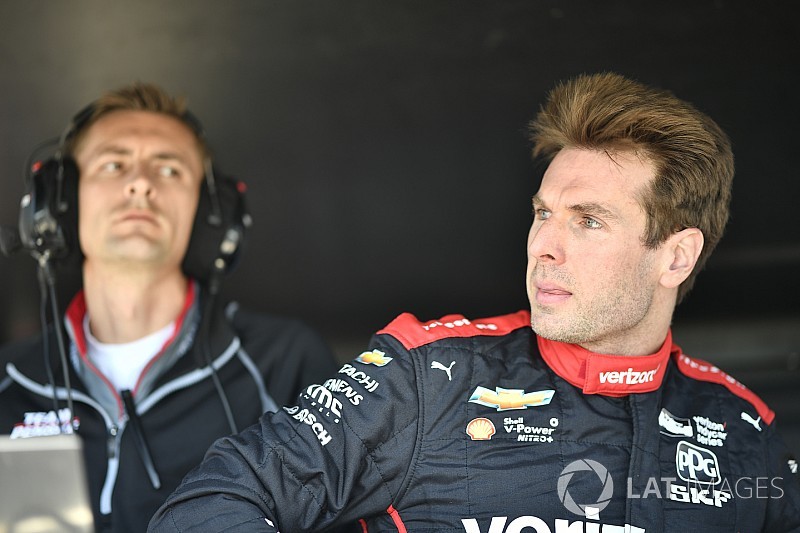 Will Power says he couldn’t even see his own hands when he hit a puddle on the front straight at Barber Motorsports Park and aquaplaned into a spin and into the wall, eliminating him from the race.

The rain had been falling harder under yellow flag conditions for Charlie Kimball’s stranded Carlin-Chevrolet, but it was still restarted on Lap 16.

Leader Josef Newgarden almost lost his Penske-Chevrolet on the standing water on the right-side of the track, while right behind him his teammate Power lost traction, lost second to Sebastien Bourdais’ Dale Coyne Racing-Honda, and then lost control.

Power told NBCSN: “I could not see a thing – and I had just one car in front of me!  It just hydroplaned on me and was out of control.

“I just can’t believe [IndyCar] went green with how bad it was and the amount of standing water. So yeah, very disappointing, and to me, very dangerous.”

Asked if the drivers had said anything about not going green, Power replied: “I don’t know.  We were talking about it and my spotter said it was getting bad. You can see it was getting really bad and I kept saying to Roger [Penske, team owner and Power’s strategist] that I can’t see a thing in front of me. I couldn’t even see my hand in front of my face.”

Power added that the puddles “always seem to be sitting in the worst spots.  They were in various high-speed areas and on the back straight as well.”

Power, who has shunted in three of the opening four races, but finished second at Long Beach last week, said: “It’s the last thing we needed, very disappointing, and kind of disappointed that we went green…

“I don’t know what you do in that situation, because if you completely back off, somebody will hit you and it becomes really dangerous. If you try to keep in the throttle, you will do like I did and just spin.  It’s just a really difficult situation to be put in.”

Following Power’s shunt, the race was put under yellow and then red. After 35 minutes of sitting in pitlane IndyCar let the drivers run five laps behind the pace car, but it was not restarted.

IndyCar is now aiming for a local 4:30pm local time restart, and will attempt to get at least a total of one hour of running.