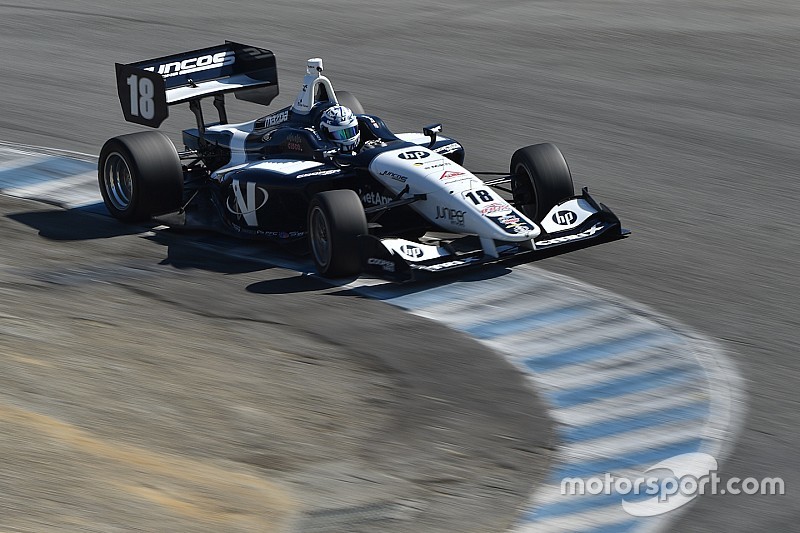 Kyle Kaiser scored his first Indy Lights win since Phoenix in May, as the penultimate race in the Indy Lights championship saw Carlin Racing’s Ed Jones wrest the lead of the championship from Santiago Urrutia.

The second Pelfrey car of Garett Grist ran sixth, while Carlin’s Neil Alberico and the second SPM car of Andre Negrao took advantage of an incident between his teammate Felix Serralles and Andretti Autosport’s Dean Stoneman that dropped the pair to 13th and 10th respectively.

Stoneman’s incidents weren’t done yet, as on Lap 11, he came together with Juncos Racing’s Zachary Claman De Melo while trying to pass, a clash that took them both into the sand. That was deemed Stoneman’s fault, and he was given a drive-through penalty which dropped him almost to the back. His title hopes are now over.

Kaiser reeled off the 30 laps untroubled, as Jones was more concerned with retaining the second place that would put him ahead of Urrutia in the championship. Veach, meanwhile, was aware of the Carlin racer’s disinterest in racing hard and therefore kept the pressure on him, trying to probe Jones’ defenses.

In truth, Jones was never in reach as he drove as flawlessly as the winner Kaiser.

Rayhall had a lonely but impressive run to fourth, 3.7sec behind third, and 4.8 clear of Urrutia, who in turn finished well clear of sixth.

The latter half of the top 10 caused the most interest in the closing laps, as Carlin’s Neil Alberico delivered on his most convincing race of the year, passing Grist on the final lap, the Pelfrey car tumbling to 11th at the checkers.

That left Dalton Kellett to head home the Andretti Autosport trio with a late pass on Schmidt Peterson’s Andre Negrao, something that Serralles took advantage of too, to claim eighth.

With one race to go (tomorrow), Jones is now seven points ahead of Urrutia, having entered the race just one point behind.