The Toyota LMP1 team has changed the chassis of its #7 TS050 Hybrid after a collision in Wednesday’s first qualifying session for the Le Mans 24 Hours. 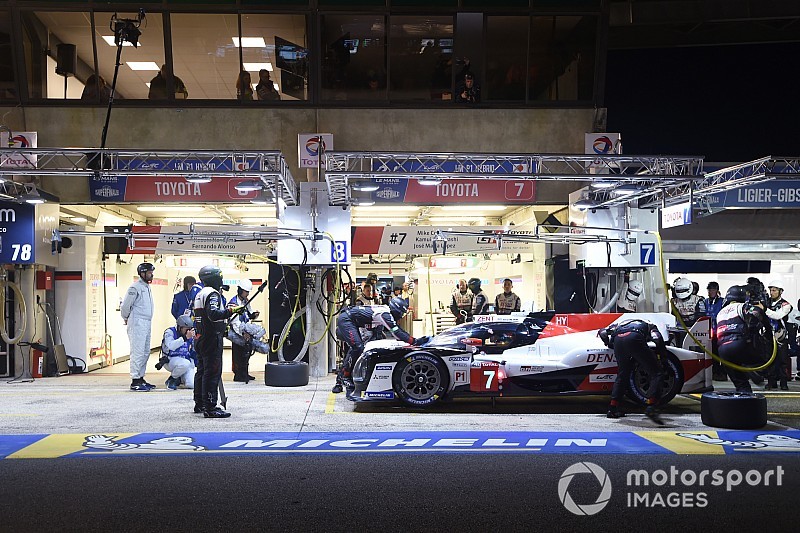 Halfway through the first of three qualifying sessions Toyota’s Mike Conway made heavy contact in the Ford chicane with the DragonSpeed LMP2 Oreca of Roberto Gonzalez.

After a spin Gonzalez rejoined the track on the racing line right as Conway’s Toyota was coming past. Conway flew across the nose of the Oreca and had to pit with heavy bodywork damage.

Toyota managed to get the car back out after a 25-minute repair, but further checks revealed damage to the monocoque of the TS050.

“Several pieces of bodywork [were damaged] and the monocoque as well,” Toyota technical director Pascal Vasselon explained. “It was possible to run after [the incident], but inspecting the monocoque is alway a longer job.

"It’s a second deeper check which has revealed a crack. It was not reasonable to race with that,  so we went for a change.

According to Vasselon, Gonzalez and Conway “shared responsibility” for the accident, but the FIA stewards blamed Conway for the crash, ruling that the Briton failed to slow down sufficiently for the double yellow flag at the scene of Gonzalez’ spin.

Conway, who shares the #7 car with Jose Maria Lopez and Kamui Kobayashi, was hit with a suspended three-minute stop and hold penalty in case of a similar infringement during the rest of the weekend.

Earlier in the session, Kobayashi had taken provisional pole with a best effort of 3m17.161s.