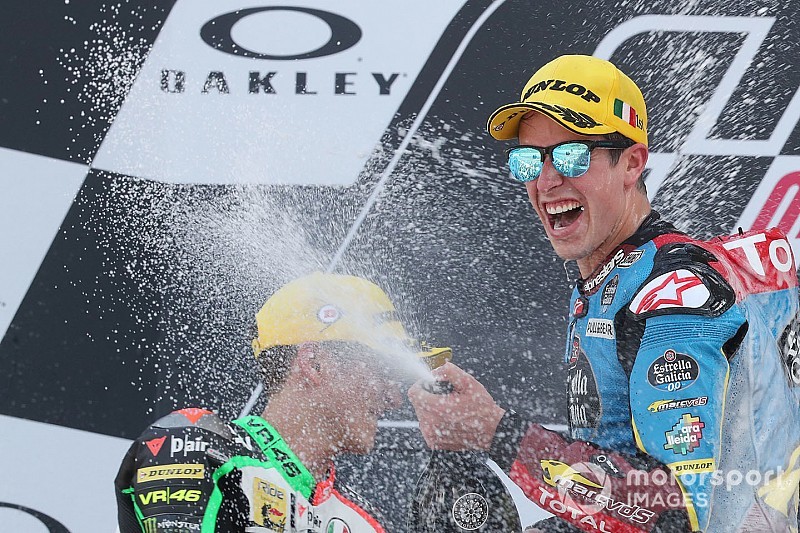 He passed Schrotter on lap 6 and then Luthi on lap 9, both at Turn 1, and then quickly pulled away.

As Luthi couldn't keep up with Marquez, he came under pressure from Sky VR46's Luca Marini.

He could only keep Marini at bay for four laps but by the time the local rider had assumed second place, Marquez had established a two-second lead and Valentino Rossi's half-brother was also unable to close the gap.

Marquez cruised to the finish to win by 1.9s with Marini, closely followed by Luthi and Baldassarri until the end, scoring his best result of the season in second.

Luthi held on to third, with Baldassarri salvaging fourth from 15th on the grid, the Pons rider keeping the championship lead but only by two and four points from Marquez and Luthi respecitvely.

Speed Up's Jorge Navarro lost his place to Baldassarri after a mistake and then was under attack by Augusto Fernandez (Pons) and Enea Bastianini (Italtrans) on the last lap.

Fernandez in the end secured fifth followed by rookie Bastianini and Navarro, with Schrotter dropping to as low as eighth place.

Gresini rider Sam Lowes was a distant ninth, with Navarro's rookie teammate Fabio Di Giannantonio taking an impressive 10th after dropping to the back of the field on the opening lap.

Folger returns to racing in Barcelona Moto2 round