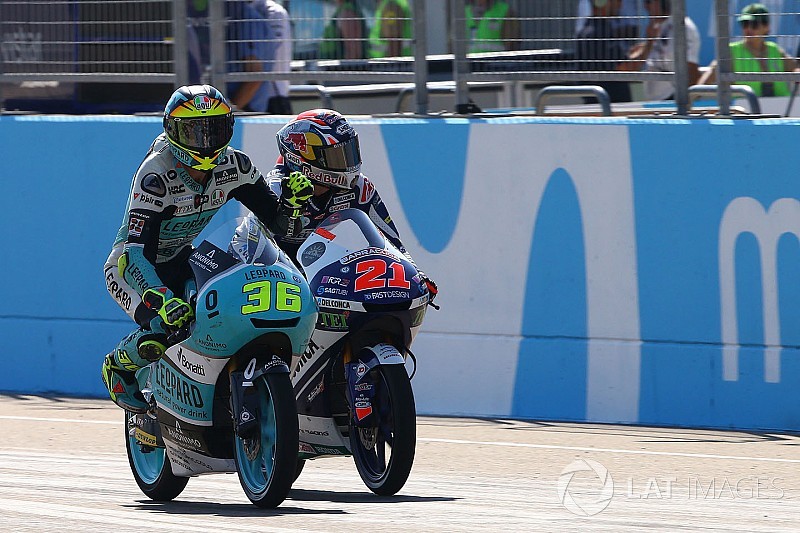 Moto3 championship leader Joan Mir has been handed a six-place grid penalty for the next round of the season at Motegi for "irresponsible riding" at Aragon.

The Spanish youngster scored his eighth victory of the season at the Spanish circuit, grabbing the lead at the start of the final lap and beating second-placed rider Fabio di Giannantonio to the finish by 0.043s.

However, stewards took a dim view of the weaving tactics Mir employed on the long back straight approaching the final corner to try and break the slipstream.

While the Leopard Honda rider was allowed to keep the win, he was docked six places on the grid for next month’s Motegi race for “riding in an irresponsible manner”.

Speaking afterwards, Gresini rider di Giannantonio hit out at what he felt was a “dangerous” move by Mir.

“At the end my plan was to be second on the back straight and then overtake the rider in front at the last corner,” said di Giannantonio.

“But Mir did something dangerous, I think, because when you are really fast it’s dangerous to do something like this.

“We are riders who know each other very well, I expect the respect that I give other riders [to be returned]. When some riders do something like this, it’s not so good."

In his defence, Mir said: “I put myself in the front, because with two laps remaining, 'Diggia' [di Giannantonio] did the same.

“This is really difficult to manage, because you don’t know what the other riders will do. So I say ‘I will go in front and do it myself’. It was part of my strategy.”

Mahindra hoping to end 2017 on a high after Aragon disappointment

Herrera sidelined as AGR squad pulls out of Moto3