Andrea Dovizioso says he had no qualms about his Ducati MotoGP team allowing his squadmate Danilo Petrucci to fight him at Le Mans instead of deploying team orders like “in Formula 1”. 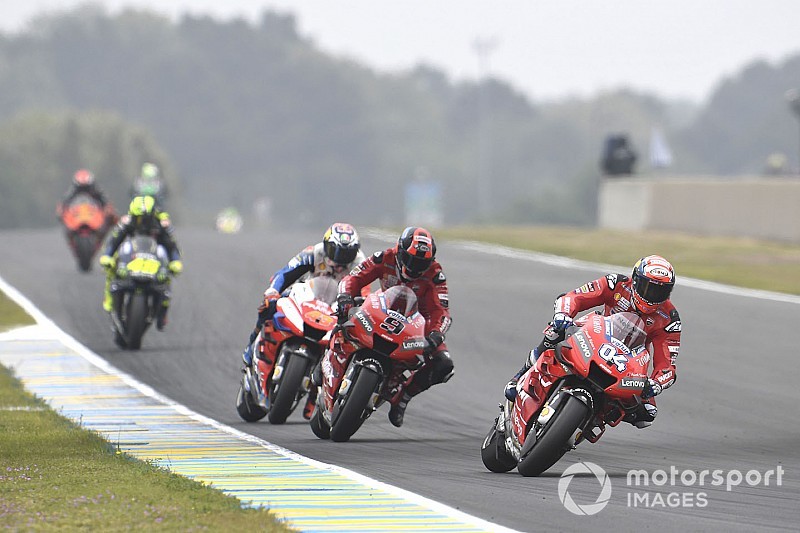 Dovizioso was running second behind eventual race winner Marc Marquez in the late stages of the French Grand Prix, but came under pressure from Petrucci, who he admits was “a bit faster” at that point in the race.

The Italian, who stands as Ducati's main hope for the riders' title for a third straight campaign, was famously a benefactor of team orders back in 2017, when then-teammate Jorge Lorenzo received coded messages in Malaysia and Valencia to let Dovizioso past.

Lorenzo didn't obey on either occasion, while in Le Mans Petrucci was seemingly free to take on Dovizioso, finishing just a tenth and a half behind and stressing after the race that he “tried my best” but was mindful of causing a crash.

Asked afterwards if Ducati should've considered ordering Petrucci to stay behind, Dovizioso said: “If you are in F1, yes, but in our championship no, and especially in the beginning of the season.

“Depends which way you want to look, if you want to take the maximum [points] maybe can be a good idea, but in our sport most of the time is not like this.

“It's good, Danilo is strong rider, in the championship he is in a good situation, he has to bring the maximum and I am happy to have this kind of fight. He tried, it was difficult because I was pushing really hard, I was struggling with the tyre but my laptime at the end was [1m]32.8s, not too bad.

“But he didn't do something crazy and this is not what we need, and I am happy about that.”

Dovizioso trails championship leader Marc Marquez by eight points after Le Mans, with Petrucci a further 30 down in fifth place.

“Today I was struggling, at the end to finish second was good, but I was fighting with the bike, especially the rear tyre,” Dovizioso said. “This is not good, if you want to fight for the championship.

“At the end I was too slow. I could not keep the good pace until the middle of the race, this is negative. We have to stay calm because we are very close [to Marquez].”