Repsol Honda made a clean sweep of the top three places after day one practice for round 15 of the 2011 MotoGP Championship at the Grand Prix of Japan that takes place at the Twin Ring Motegi circuit.

Dani Pedrosa ended day one on at the top of the timing sheets ahead of his teammate and current championship leader Casey Stoner who was in close contention throughout the two sessions and keeping a watching brief behind was the third Repsol Honda rider Andrea Dovizioso.

Tomorrow we have to focus on the set up of the bike.

San Carlo Honda Gresini rider Marco Simoncelli finished his first day in fourth position on his RC212V with a best lap of 1m 47.188s ahead of reigning champion Jorge Lorenzo (Yamaha Factory Racing) who was outside the 1m 46s bracket with a time of 1m 47.310s.

Pedrosa eventually set a best time of 1m 46.790s to leave him in top position at the Honda-owned track. The Spaniard was happy with his first day and with the surface of the Japanese circuit that was re-laid recently because of the earthquake earlier this year.

"We did a good job today; in the morning we took a good direction and this allowed us to improve a lot in the afternoon, by a second, and this is very important,” the Spaniard said while continuing, “Tomorrow we have to focus on the set up of the bike; maybe the weather will change a little bit, so we have to be aware of the conditions and try to be fast anytime. In case it does rain tomorrow and we cannot practice anymore in dry conditions, we already have a good set up for the dry.

“Everybody here at the Motegi circuit has done a very good job with the new surface, the grip is much better than before and this is one of the reasons why the lap times have improved quite a lot already from last year,” Pedrosa added.

Stoner was content with his best lap of 1m 46.844s and there is a lot more to come from his RC212V as he explained in his post session interview. “The bike felt pretty good this morning and then this afternoon we started the session on pretty much the same setting that we ended on this morning, it felt ok but we felt we could improve. Unfortunately we went in slightly the wrong direction and couldn't get the bike to turn or hook up on the last two exits and then we didn't really have enough time to come in and make a change.

“We know what direction we want to go in now and hopefully tomorrow we can make the small improvements. The new surface here feels very good, very smooth and the grip level is impressive. It's really great to be racing here on a Honda in front of the home fans and I hope we can get a good qualifying tomorrow to prepare best for the race on Sunday,” Stoner said.

Dovizioso was happy with his first two outings on the Motegi circuit setting a best of 1m 46.952s but he wasn’t impressed with the new surface. “I am very happy with today's sessions. All the Honda riders are constantly fast and we are all very close. The new tarmac is ok, but totally different feeling from last season, it's still bumpy, even more then before, but anyway we are faster then in 2010. The feeling with the tyres is totally different due to the new tarmac and the biggest problem is to find rear grip entering corners, this is the area where we will concentrate our efforts for tomorrow,” he said. 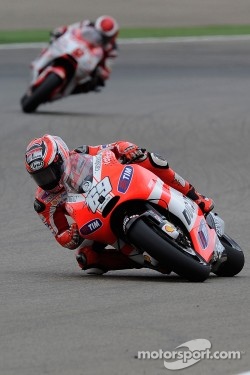 The top Ducati was that of Marlboro Ducati rider Nicky Hayden who worked hard on his GP11.1 to register a best lap of 1m 47.381s to give him sixth position and the American rider was third fastest in the first session giving some hope of improvement for his Italian team.

Sitting in seventh place is the man hoping to put on a show for his home fans and Hiroshi Aoyama (San Carlo Honda Gresini) is determined to do well at his home GP and with a 1m 47.785s lap he is moving in the right direction for a good result in Sunday’s race.

Finishing just behind Aoyama was seven-time MotoGP champion Valentino Rossi who is using the part aluminum – part carbon fibre chassis for the second race weekend. Rossi managed to set a best lap of 1m 47.975s on his GP11.1 and is hoping of a better result in Japan after being on the podium last year.

Mapfre Aspar rider Hector Barbera was the first rider out of the 1m 47s bracket on his Ducati GP11 with a time of 1m 48.055s to secure ninth just ahead of Colin Edwards on his Monster Yamaha Tech 3 YZR-M1 with the Texan rider setting a best lap of 1m 48.076s.

The next rider on the timing sheets was Alvaro Bautista who is in intent on making another top performance here at his Rizla Suzuki team’s home race after a great performance in Aragon, Spain where he grabbed sixth position. Bautista’s time of 1m 48.097s was enough to keep him ahead of Frenchman Randy de Puniet (Pramac Racing) who sits 12th in the timings on a 1m 48.374s lap. British Rookie Cal Crutchlow had a tough first day and eventually registered a best time of 1m 48.379s leaving plenty to do ahead of tomorrow’s qualifying session. Crutchlow sits in 13th and one place ahead of American Ben Spies (Yamaha Factory Racing) who was hit hard with a bout of food poisoning and only managed a best of 1m 48.567s and just five laps in the second session before going to Clinica Mobile for treatment. Sitting in 15th is Toni Elias with his LCR Honda that he managed to set a time of 1m 48.743s ahead of 16th placed Karel Abraham for the Cardion AB Motoracing team with a best of 1m 49.305s.

The final three positions went to two wildcard Honda entries and one substitute rider. Kousuke Akiyoshi, who rides this weekend for the LCR Honda team sits in 17th with his best of 1m 49.464s while veteran racer Shinichi Ito finished the first day in 18th for the Honda Racing Team on his best of 1m 49.673s. Both the Japanese riders finished ahead of Australian rider Damian Cudlin who is stepping in for injured Pramac Racing rider Loris Capirossi and Cudlin set a best time of 1m 51.349s. 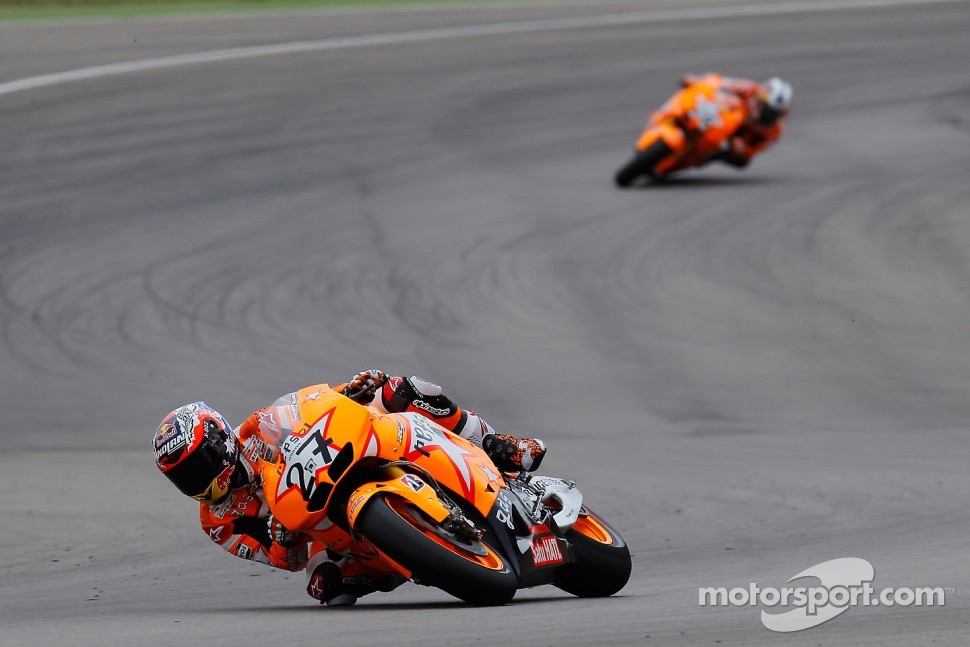