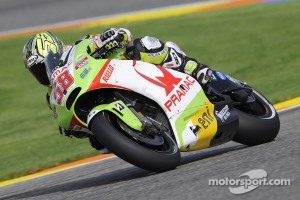 Valencia was the last race of Loris Capirossi's long and glorious career. The MotoGP veteran was extremely moved at the end of the race, which he finished in ninth place. Pramac Racing Team thanks Loris for all the emotions that he gave us this season. Good luck, champion!

"This difficult season is now finished. It was the umpeenth unfortunate race for Randy after the good results earlier in the weekend. Loris was doing well, but at the end he didn't feel like pushing because of the rain. It was a pleasure work with him, and I wish him all the best."

"What can I say, now it's really finished. The race was complicated by the rain, and in the last laps I couldn't push because I risked crashing. I wanted to end my career in a good way honoring Marco. I gave my best. Thanks to all the people that have supported me. Now I'm retired!"

"I'm angry, disappointed, and sorry. This has really been an unfortunate season. Bautista's fall caused my crash and three other crashes. I was convinced that I would've had a good race. I wanted to end this season in the best way possible. It was a pleasure to be Capirex's teammate in his final season."