New Year rings in 2012 news prior to first test days

With the first test of the 2012 MotoGP Season scheduled for the end of this month in Malaysia news of sponsorship deals and new partnerships are coming thick and fast.

The Yamaha Factory Racing team was searching for sponsors throughout the 2011 season after 2010 title sponsor Fiat ended its partnership with the Japanese manufacturer upon the departure of Italian Valentino Rossi to Ducati. Since then Yamaha was without a title sponsor and lost its main partner in Malaysian Oil company Petronas ahead of this year’s championship. 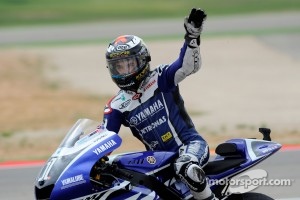 However it has been confirmed by a number of sources that Japanese oil brand ENEOS will sponsor the team in 2012. An official announcement on the partnership is expected within the next week or two.

This week also sees the announcement of Ten Kate Racing Products striking a deal to enter the world of MotoGP when the Dutch firm, that is the main campaigning Honda team in the World Superbike series, confirmed its involvement with the San Carlo Honda Gresini.

Ten Kate announced the deal on its own website where it was stated that the engine and electronics will be based on the late 2011 WSBK specifications and during the season developed to suit the CRT bike.

Gresini will participate the new 2012 CRT series with one rider - Michele Pirro. Chassis expert FTR will develop the new CRT chassis where TKRP will supply the race engines and electronics.

Meanwhile, as the teams continue to put the pieces in place for the upcoming season the riders are also making their own changes. MotoGP and 2011 Moto2 champion newcomer Stefan Bradl has chosen #6 for his rookie season in the premier class instead of #65 that appears to be retired after Loris Capirossi, who also used the number, hung up his leathers at the end of last season.

Newly appointed safety officer Capirossi said he will handpick the Bridgestone tyres that the riders will use for 2012 after stating that he is not happy with a number of points with regard to the race rubber. The main problem Capirossi said was the hardness and durability of the tyres.

Newly-crowned World Superbike Champion and former MotoGP rider Carlos Checa, who was drafted in to assist in the testing of Ducati’s GP12 due to testing limitations by factory riders imposed by Dorna, also said that the Bridgestone tyres are very rigid and complained of a lack of feel and also put the Ducati’s lack of performance down to the Bridgestone rubber.

W Series US: Chadwick wins race one with title rival Powell in third

NASCAR to impose crew suspensions for lost ballast or wheels