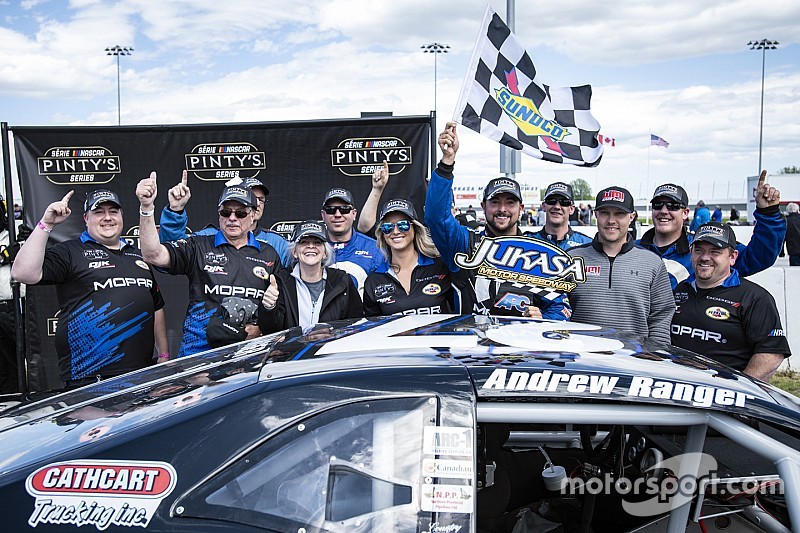 Veteran Andrew Rangers outlasted Kevin Lacroix in a green-white-checkered finish to pick up his 25th NASCAR Pinty’s Series victory in a rain-delayed event.

After two races into the 2019 NASCAR Pinty’s Series season it appears Ranger and Lacroix will be the drivers to beat for the series title.

After Lacroix edged Ranger at Canadian Tire Motorsport Park last month to win the season opener, the duo flip-flopped positions with Ranger picking up the victory on Sunday. Ranger was able to hold off Lacroix in the two-lap sprint to the finish.

“Kevin was fast, too, and he came down hard on the bottom and I was able to hold on to the lead on the outside.

Ranger holds the series record with 25 wins and enjoyed leads by as much as four seconds midway through the race before cautions bunched up the field a couple of times over the last 75 laps of the APC 200.

“My car was better on the high line and I tried to save my tires,” said Ranger. “(Teammate) DJ (Kennington) was behind me and he had a flat tire it made me very nervous. But my tires worked for the Mopar car and I am happy about that and getting the win with my girlfriend and family here with me today.”

Lacroix, who won this event last year, was fast all day and tried to work on the inside on the final restart passing Shepherd for second and giving Ranger all he could handle as the two were side-by-side heading into the final lap.

“Our car was better on the outside groove and really lose on the inside,” said Lacroix. “Second place for us on the ovals is really good and we won the opener on the road course. We started practice fast and were fast on the long run and with the late restart we only had two laps to make the run. Good to come home second.”

Shepherd led some laps in the race and felt a change to his car and having to restart on the outside groove on the final restart of the race cost him a chance at the win.

“Yeah, it was my fault as I wanted the car a little tighter at the end and I thought the track was freeing up,” said Shepherd. “That last restart I had to start on the outside and I washed up the track a bit on the restart. It’s big for us to run in the top three and contend for the win.”

The race was slowed seven times for caution with five different drivers leading the event.