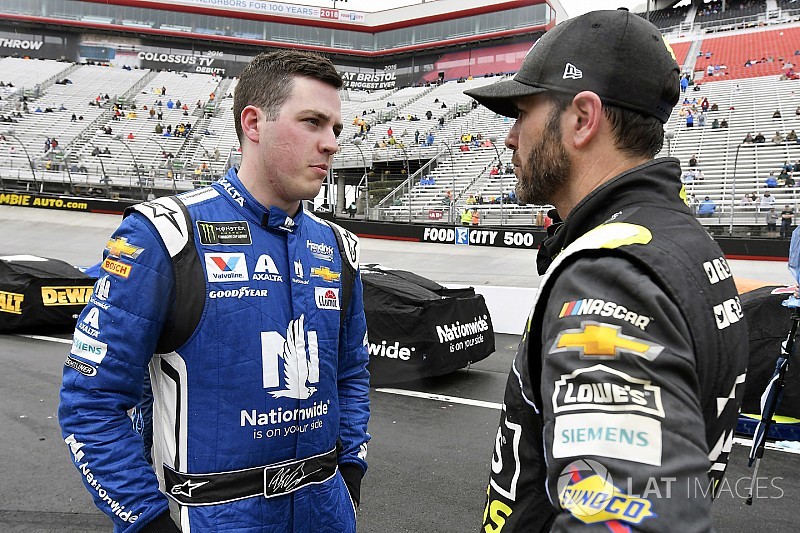 Jimmie Johnson, who is facing the longest winless streak of his career, had just one top-ten this season (ninth at Auto Club) going into Bristol.

But the No. 48 returned to form at the concrete half-mile, running as high as second before finishing third to Kyle Larson and race winner Kyle Busch.

"Yeah, definitely a strong race car," he said after the race. "We've been talking about our cars performing better and driving better and creating speed the last three weeks or so, but to finally back it up with a solid finish is exactly what we needed. And to see my teammates with positive comments about their cars the last few weeks and some good results yielding from all of that, we definitely have it rolling in the right direction.

"And specifically on the 48, last weekend there was a lot of excitement with the speed in our car, but we just had some bad luck on track and on pit road and a variety of things that went on. And to really be so buttoned up on race calling, pit stops, what I did in the car, the whole thing, I really feel like we're rolling in the right direction now."

"We got a good start there for once and had some good track position," he said. "Just thankful for driving for Hendrick Motorsports. It’s been a lot of fun finally getting some good runs going our way. It’s been cool. To run fifth, it’s not a great day, but it’s better than what we started the year doing. We are making progress, making steps in the right direction and just got to keep doing that.”

And Bowman believes they could have even finished higher, had he been able to find more consistency.

“I think by our self we had maybe even a faster race car than that. I just couldn’t be consistent with it. We were really loose in and my car was really sensitive to traffic. If anybody got within a half a car length of me behind me, it just turned sideways getting in the corner every time. If I could break that gap and get away from them I would drive away, but with them right there I couldn’t do anything.  It was interesting trying to fight through that, but glad we finished top five.”

Bowman and Johnson leave Bristol 13th and 17th in the championship standings, respectively. Although William Byron ran up inside the op-ten for part of the race, he fell back towards the conclusion and finished 17th. And Chase Elliott never had much of a chance to show what he could do after getting swept up in a multi-car accident on Lap 3 and finishing 29th.

But regardless, there's no doubt that putting two cars inside the top-five will be a huge confidence booster for Hendrick Motorsports.

"Yeah, I think most situations momentum does carry you up or down," said Johnson. "If things seem to be going wrong, they continue for a while. Sometime it'll turn around, you just don't know when.  And I think in most cases, you're right.  I have experienced it in my career where we have had different dry spells, and we'll get the car going well, and I'll make a mistake, or the car going well and we have a bad pit stop, or just unlucky, and it takes a little while ‑‑ I can't explain why or how, but it takes a little while to get the momentum rolling in the right direction, and I think today was ‑‑ the last two days was a big step in the right direction for us."