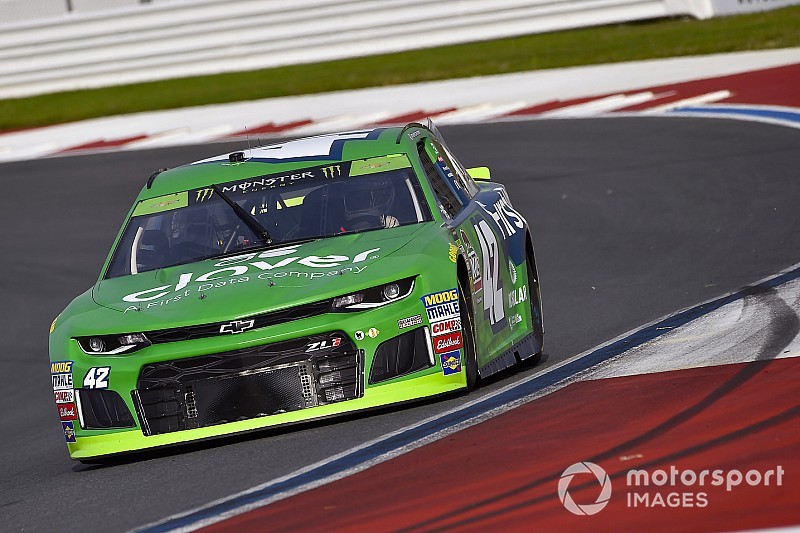 Kyle Larson held off pole-winner Kurt Busch to claim the Stage 1 victory on the Charlotte Roval.

Larson got around Busch early in the 25-lap segment and was among those who elected not to pit during the stage.

Kurt Busch took command early but on the first lap, Larson had already moved his way up to the runner-up position.

Five laps into the race, Denny Hamlin was forced to pit under green as he thought he had a tire going down. Hamlin returned to the track in 39th.

While exiting the frontstretch chicane on Lap 6, Larson got around Kurt Busch and took the lead for the first time in the race.

Elliott got to the inside and around Kurt Busch entering Turn 1 on the start of Lap 10 to take over the runner-up position.

With 15 laps remaining in the first stage, Larson held a more than two-second advantage over Elliott. They were followed by Kurt Busch, Bowman and Johnson.

Stanton Barrett plowed nose-first into the barrier in Turn 1 on Lap 13 to bring out the first caution of the race.

Larson was among those who elected not to pit and remained in the lead when the race returned to green on Lap 17. He was followed by Elliott, Kurt Busch and Johnson.

Daniel Suarez and Landon Cassill were both penalized by NASCAR for speeding on pit road during their respective stops.

During the restart, several cars went four-wide entering Turn 1 and Erik Jones suffered some damage on his No. 20 Toyota during the incident.

With five laps left in the first stage, Larson held about a 1.6-second advantage over Kurt Busch with Bowyer not far behind in third.

The cars of Hamlin, Brad Keselowski, Jones and Darrell Wallace Jr. (backup cars) and Regan Smith (changed engines) had to start the race from the rear of the field.