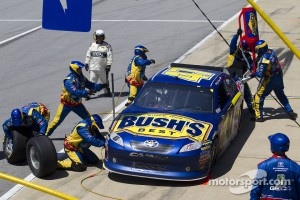 BRISTOL, Tenn. (August 24, 2011) - - This weekend Bobby Labonte and JTG Daugherty Racing hope they have the found the right ingredients to be a strong contender in the Irwin Tools Night Race at Bristol Motor Speedway with Bush’s Baked Beans front and center of the No. 47 Toyota Camry fielded by JTG Daugherty Racing.

“Bush’s Beans is on our Toyota Camry for both Bristol and Atlanta Motor Speedway,” Labonte said. “We’re very blessed to have some of the best brands in our sport. We feel pretty good about this weekend. The team has always run well at Bristol. It’s a fun high-banked fast short track where you have to be patient and I enjoy racing there. We’re looking forward to putting on a great race for our fans under the lights.”

Labonte’s best NASCAR Sprint Cup Series finish in Thunder Valley is third-place in 2003 with Joe Gibbs Racing and he has a total of three top-five and 10 top-10 finishes. Additionally, the place has a special meaning to Labonte. His first of 10 NASCAR Nationwide Series victories occurred at the .533-mile concrete oval. Earlier this season, Labonte rallied from a 360 degree spin to finish 13th in the Cup race with JTG Daugherty Racing.

"We had a solid finish there in March," Labonte said. "We beat a lot of good cars. We were just too tight there near the end making it hard to pass.”

The JTG Daugherty Racing should have a good feeling venturing into this weekend because they previously fared well at Bristol. The team’s best finish is third that occurred in August 2009 with Marcos Ambrose and they aim to have similar success with 2000 champion Labonte.

“Bristol has always been a better place for us,” crew chief Frank Kerr said. “Our setup has been good no matter who’s driving the car. We’re looking forward to going back with Bobby. He’s had some success there and we feel like we can improve upon our finish last time out at Bristol.”

Bristol is a favorite track of Kerr’s for more reasons than one.

“The track is better now because you can run two and three wide where it used to be a bump and run deal,” Kerr said. “Now, a driver can run in different areas and pass instead of running over people.

“I just love going there because the racing is really good,” Kerr continued. “You cannot go to another small track like that and get that many people in the stands. It’s an amazing place and on top of that, it’s a night race.”

Saturday night, Labonte will be heavily relying on his spotter David Green to keep him out of harm’s way. Green also has a NASCAR Nationwide Series win at Bristol and knows the importance of a spotter at the high-speed congested bullring where mayhem happens in a hurry.

“I have to get reprogrammed for this race because typically you’re at a 30 second track and now you’re looking at 15 seconds,” Green said. “My watching ahead and around Bobby is now under a microscope. Additionally, things on the radio have to be condensed by four times because it’s a small fast track. You have to remember how quick everything happens and that Bobby’s range of vision is so limited. He’s only grasping what is in his eyesight. Not only does it happen quick out of the windshield for him, but it seems like it happens quicker up top. I have to do a good job and keep distractions down and concentrate. This is one race I tape and go back and watch because you are so focused on your car in the race that you don’t know what else happens.”