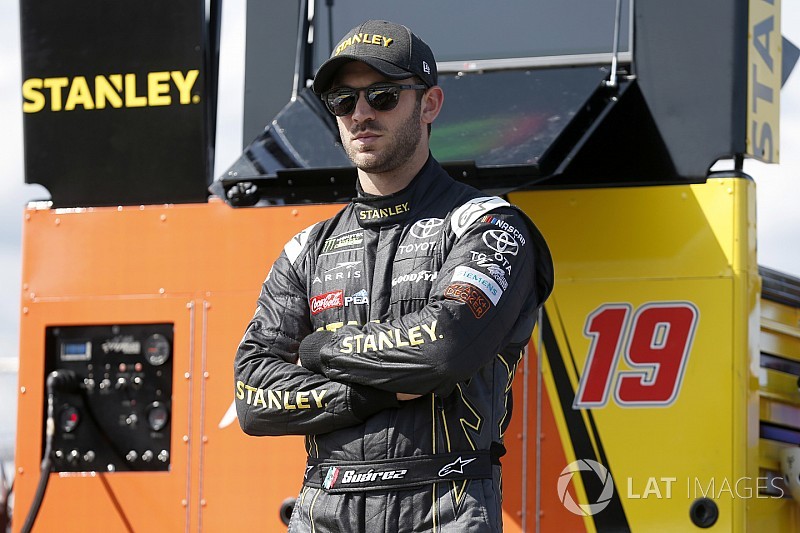 Daniel Suarez enjoyed his best NASCAR Cup weekend to date in Pocono, starting from the pole and scoring his first runner-up finish in NASCAR’s top division.

Suarez would probably still be celebrating if it wasn’t for his teammate Kyle Busch as the second-year driver came one spot short of becoming the first Mexican-born driver to win in the Monster Energy NASCAR Cup Series.

Suarez matched Busch on the first restart in overtime, but fell back when his teammate Erik Jones tried to go three-wide in Turn 1, allowing Busch to score his sixth win of the season.

For Suarez, who was awarded the pole after Busch and Kevin Harvick both failed post-qualifying inspection on Saturday, remaining among the frontrunners for the majority of the race.

He lined up second to his teammate Busch late in the race and was to his inside on the final overtime restart, battling side-by-side racing for the race win.

“You know, man, sometimes as a driver you're on offense or you are on defense, and myself in the second part of the race, I was the most of the time on offense, and I was just attacking as hard as I can,” said Suarez.

Although Busch held on for the victory, Suarez was happy to be in contention for the win all day long.

Suarez has been fast several times this year during races and Sunday was his best race from start to finish.

“You know, a lot of times this year we've been in the situation where we have good top‑10 car in the beginning of the race, and then you have to make adjustments,” he said.

“You can't stay without touching the car because everyone gets better, and if you don't do a good job making good adjustments in your race car, you are going to get behind.

“I felt like in the last couple months maybe - I don't really know why, but for whatever reason we haven't done a good job keeping up with the track and making adjustments, and we start good in the race but then we just - we are not as strong by the end of the race. That is what really matters.”

Heading to another track where he can win

Suarez hopes to ride this momentum into next week when he returns to Watkins Glen (N.Y.) International where he scored his first podium finish in the Cup Series last year in his first start at the road course.

“Yeah, actually I was just talking about that, how good is this result for our race team and for everyone in the No. 19 group because we know how good we run in The Glen, and we had a good result my first time there in the Cup car,” he said.

“We are not expecting anything less. We have good momentum right now on our side, and hopefully we can keep that going.”