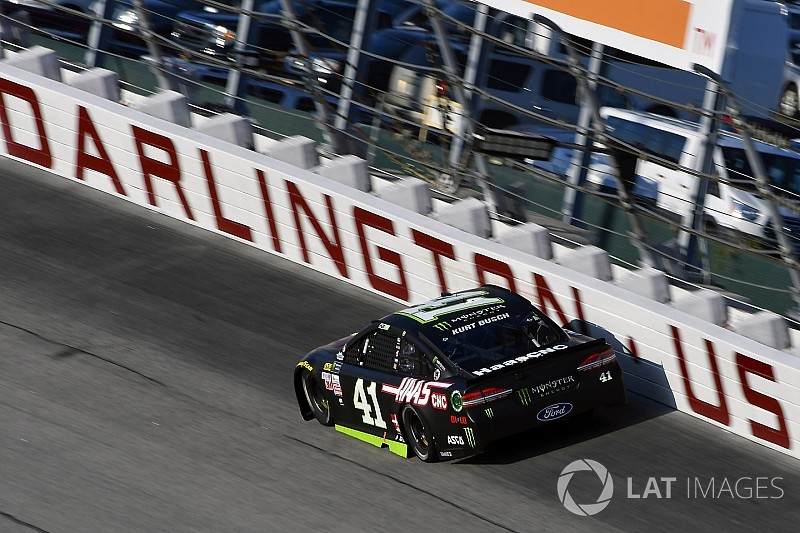 Kurt Busch didn’t have anything for the Toyotas down the stretch, but he delivered one hell of a drive at Darlington Raceway.

Kurt Busch didn’t have anything for the Toyotas down the stretch, but he delivered one hell of a drive at Darlington Raceway.

Busch led the effort for Ford Performance in the Southern 500 with a third-place finish.

While his teammate Kevin Harvick led the most laps (22), Busch was the only Ford to finish on the lead lap on Sunday.

“It was good pit strategy,” Busch said. “I was hoping for one more yellow. If there was a yellow with 30 to go, we were a really good car on short run speed. That was the longest run at the end and those guys caught us on their fresher tires, but just to be in position to win the Southern 500 is great.

“I didn’t quite get the job done, but third is really nice for a big, marquee race.”

Busch was fast off the truck on Friday. On Saturday, he qualified the No. 41 Monster Energy/Haas Automation Ford seventh. While he fell just out of the top 10 after the first stage, Busch restarted 12th for Stage 2 and nine laps later passed Jamie McMurray for eighth-place. He finished seventh in the second segment — and retained his position in the pits for the final run.

With 125 laps remaining, Busch motored up to sixth. Pit stops started six laps later. Busch came in for service on Lap 252 and when the pit stops cycled out, the No. 41 Ford was sixth. When the eighth caution waved on Lap 261 for debris, Busch pitted again and exited fourth. The race went green on Lap 266. On the next lap, he vaulted past Kyle Busch and Martin Truex Jr., for second place with 100 laps to decide the race.

Busch worked his way around race winner Denny Hamlin for shelled on Lap 318. He led seven laps before Truex passed the No. 41 Ford. Busch scrubbed the wall attempting to hold onto his car on old tires in the closing laps.

“It just took away the nice fender flare we had on the right-rear,” Busch said. “The car was a little looser after that, but with 25 to go you’ve got to find every ounce you can and I was right there on the limit.”

On 10-lap new tires, Hamlin and Kyle Busch blew by the No. 41 Ford. But with Busch picking up his second top-five finish in two weeks, he’s cautiously optimistic heading into the playoffs.

“We’ve had a couple good runs, but, still, we’ve got 11 weeks ahead of us,” Busch said. “We treated this whole weekend like it was the Playoffs. Richmond will be the same thing next week.

“It was a lot of fun with the Monster Energy Ford. To be in position to win the Southern 500, it throws chills down your spine. With about 100 (laps) to go I knew we were close. I was hoping that we would find the right strategy to come out ahead. The 78 (Truex) was fast and those other Toyotas came in there. I thought that I was going to do it for our Fords. We didn’t quite get the job done. To be in position to win the Southern 500, I just want to get a shout-out to all the fans. It’s a fun weekend to be here on Labor Day weekend.”