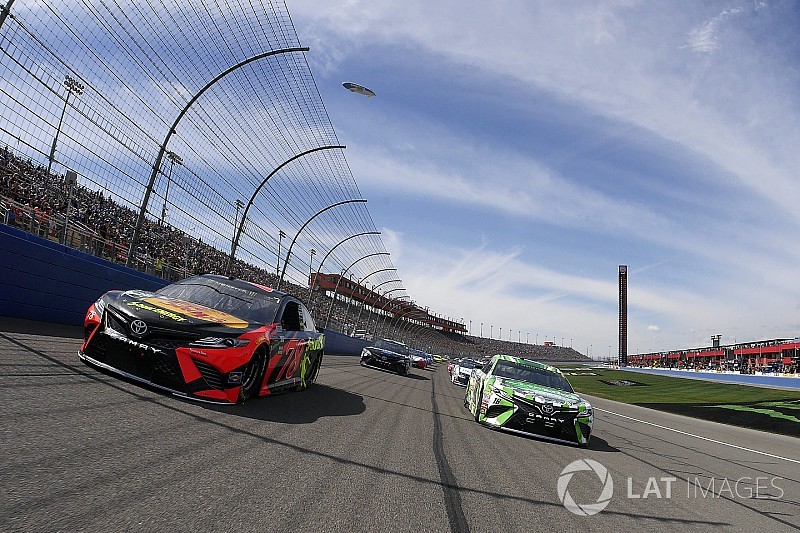 Truex cruised to a 3.4-second win over Kyle Busch to win the first 60-lap segment. Joey Logano was third, Brad Keselowski fourth and Jimmie Johnson rounded out the top-five.

"It feels good to get our first one. I feel like we have something for them today," Truex said during the stage break.

It’s the first stage victory for Truex this season. He led the series with 19 last year.

Johnson’s six stage points are his first of the 2019 season.

Truex, the pole-winner, took early command of the race but with Kyle Busch staying well within striking distance.

On Lap 11, Busch had closed the gap enough to make a pass around Truex on the outside to take the lead for the first time in the race.

Logano was the first to head to pit road to begin green-flag pit stops on Lap 25. Logano’s move ignited a slew of others, all attempting to basically cut the first stage in half.

The green-flag stops cycled through on Lap 30 with Kyle Busch back in the lead but one lap later, Truex made his way around Busch and back into the top spot.

On Lap 38, Kevin Harvick got into Larson while the duo were racing for position exiting Turn 3 and Harvick then hit the outside wall, doing significant damage to his No. 4 Ford.

“My fault,” Harvick said over his team radio.

Larson’s take: “I didn’t do a damn thing wrong.”

During the round of pit stops, Truex came off pit road first and continued to hold the lead on the restart on Lap 42.

With 11 laps left, Ryan Blaney appeared to hit the wall exiting off Turn 4 and was forced to make a green-flag pit stop. He ended the stage in 32nd place.

With 10 laps remaining in the segment, Truex held a more than 1.7-second lead over Kyle Busch with Keselowski, Logano and Kurt Busch rounding out the top-five.

Four drivers had to start the race from the rear of the field – Gray Gaulding and Alex Bowman for engine changes, Daniel Suarez for using a backup car and Michael McDowell for making a rear-gear change.

Joey Logano on tire rule change: "NASCAR had to do something"