Strength in numbers: Ford enjoying a resurgence in 2017 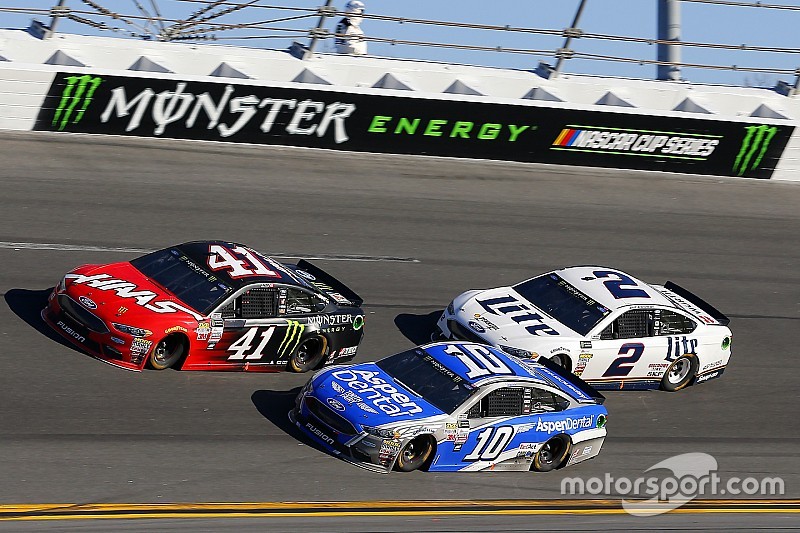 Ford Performance came tantalizingly close to its best start to a Monster Energy NASCAR Cup season in 25 years, and despite a late-race disappointment in Sin City, the trend line for Ford remains sharply positive.

On Sunday at Las Vegas Motor Speedway, Brad Keselowski was two laps away from giving the Blue Oval brigade its first sweep of the first three races since 1992, when Davey Allison and Bill Elliott combined to win at Daytona International Speedway, North Carolina Motor Speedway and Richmond International Raceway.

Ford drivers went on to win nine consecutive races that season and 16 of 29 events. In that same year, the car maker won the first of six manufacturer’s championships over an 11-year span. But Ford hasn’t won a manufacturer’s title since 2002, and its last driver’s championship came with Kurt Busch and Roush Fenway Racing in 2004.

Given the parity Cup Series—and a relatively equal number of quality drivers spread among Chevy, Ford and Toyota--it’s unlikely a manufacturer could dominate the tour in the current climate. But with the addition of Stewart-Haas Racing to Ford Performance, the Dearborn, Michigan, car company has its best opportunity in a long, long time.

More bullets in the chamber

While it’s hard to beat the talent of Keselowski and Joey Logano, there’s power in numbers by adding two champions in Busch and Kevin Harvick as well as Clint Bowyer, who is hungry to reestablish his career.

“Having more bullets in the chamber is a big deal,” said Ford Performance boss Dave Pericak. “The way they’ve integrate into the teams have been great. The way they're all working together, we knew that bringing in another championship team was going to elevate the bar for everybody. So there’s a lot at play here. But it’s all come together.”

In addition to wins by Busch in the Daytona 500 and Keselowski at Atlanta Motor Speedway, Ford drivers have led 480 of the 792 laps raced this season. Keselowski also assumed the points lead from Kevin Harvick after the No. 4 Ford blew a tire at Las Vegas.

But it would surprise no one if Harvick comes back this weekend with a win, given that he leads the tour with eight victories at Phoenix International Raceway.

Certainly, prior to SHR coming on board, the pressure was on Team Penske to carry the weight of Ford’s NASCAR efforts. Since Penske moved from Dodge to Ford in 2013, Keselowski and Logano have combined to win 28 races. During that same period, only Roush Fenway Racing (with five wins), Front Row Motorsports (with two) and Richard Petty Motorsports (with one) have contributed to Ford’s trophy case.

Not giving up on Roush

Roush, which had been Ford’s flagship for two decades, down-sized to two race teams for 2017. Richard Petty Motorsports cut back from two teams to one.

Pericak was adamant that he will not abandon Roush, despite its lack of A-list drivers. He has seen marked improvement in the teams in 2017. While Ricky Stenhouse Jr., 29, continues to struggle, Trevor Bayne, 26, currently sits 11th in the standings, 50 points behind Keselowski.

“They are getting better,” Pericak said of Roush’s performance. “The cars are getting faster, they are finishing in better spots this year. We want to bring Jack back to Victory Lane. When we were there with him in the Xfinity race (with Ryan Reed at Daytona), it felt good to have Jack back in the Winner’s Circle. We’re 100-percent dedicated to that team.”

If there’s a weakness in Ford’s strategy, it has been the lack of up-and-coming talent. Unlike Toyota, which had cornered the driver development market, Ford and Chevrolet lag behind considerably. The Chevy camp claims Kyle Larson, 24, and Chase Elliott, 21, in Cup and William Byron, 19, on the Xfinity tour. The only under-25 driver running a Fusion in the Monster Energy Cup Series at this time is Ryan Blaney, 23, who is just starting his second full season on NASCAR’S top tour.

“Blaney is doing an amazing job,” Pericak said. “He’s not driving like a rookie. He’s driving like a seasoned racer, and every week he gets better and better. I don’t think Victory Lane is far off for him. I really think he’s close to getting a victory and we're very happy with how he’s progressing.”

Although Ford is getting a late start in acquiring and cultivating young talent, Brad Keselowski Racing recruited Chase Briscoe, 22, and Austin Cindric, 18, for the Camping World Truck Series this season. SHR’s switch to Ford coincided with the establishment of an Xfinity Series program featuring 19-year-old Cole Custer in the No. 00 Mustang. And of course, RFR has Reed, 23, and Darrell Wallace Jr., 23.

“Clearly, when you look at the longevity of our program and where we’re going to be five years down the road, we know that we need to have some more drivers coming up into the mix,” Pericak said. “So that’s where that (BKR) program came from.

“As far as the Roush Fenway drivers, I wouldn’t give up on those guys just yet. I think they didn't have the right equipment. There are a lot of other things we’ve been fixing inside Roush that weren’t in place. We have to give those guys the opportunity to show us. They’re there at the Cup level for a reason. I think we’re giving them better equipment now, and we’re giving them everything else in place.

"We’re still working on our execution with Roush Fenway. We need to off-load a bit better with Roush Fenway. They struggle when they come off the trailer and then they have to work harder throughout the weekend. But let’s give Trevor and Ricky a chance. I think those guys are very capable drivers and we have to give them the right situation to drive.”

Roundtable: Final thoughts from Vegas and looking ahead to PIR