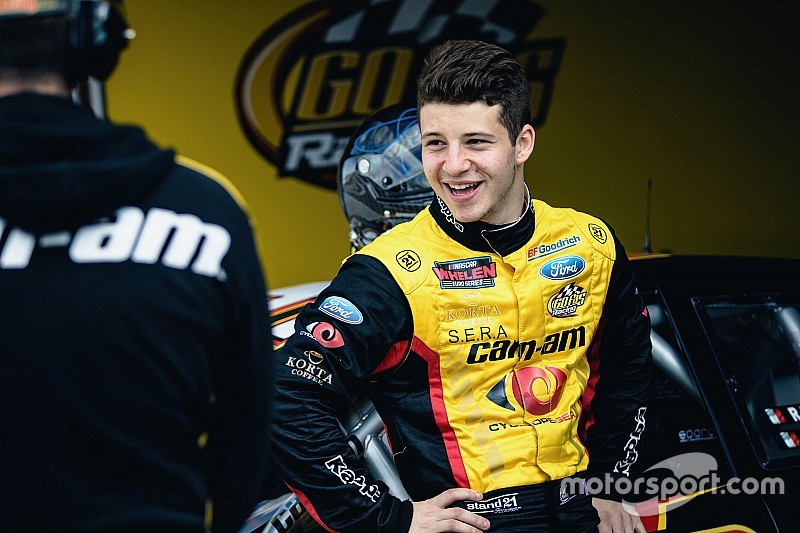 This season Motorsport.com will feature drivers from the NASCAR Whelen Euro Series as they battle for the 2018 championship.

This is your rookie season in the NASCAR Whelen Euro Series. What are your expectations goals for this year?

The NWES is a whole new and thrilling experience for me. Be that as it may, I am rather confident. The first two races held in Valencia on April and have been promising. The battle was intense but I manage to reach the second place. The upcoming rounds will be as exciting and challenging as the first ones. I’m well prepared and I’m looking forward further great results. That’s my first participation but like all the other race drivers, I strive the top of the NWES podium! Winner or not, this Championship will be highly rewarding for me. I will take the most of it to have fun and to perfect my driving alongside talented competitors.

What have you been up to in the offseason? Any new news to share with fans in Europe or America?

I’m a student in management and getting my diploma for me is as important as my driving activities. So I took little break during the offseason to focus on my studies. But I did not put the driving aside! I experimented during the offseason several types of cars as  LMP3, specific for endurance racing, a TCR touring car, and my favorite one a NASCAR car.

You had a great start to the season last week at Valencia. Was it better than you thought it would be?

I really wanted to get off to a flying start. I fought hard in this respect, but still reaching the podium of the two first races was unexpected for me. It’s a new experience for me. I was worried and excited at the same time. That mix of feelings could have played in my favor. Now I have to prove myself and my competitors that my first NASCAR performance has nothing to do with beginner’s luck. I’m confident.

This is a big step from French F4 championship to NASCAR. Why did you make this move now?

It is indeed a major step! NASCAR offers a quite different experience from French F4. The way of driving a single seater car has a few in common with driving a stock-car. The position in the cockpit, the vehicle’s weight, the circuit’s shape, the number of competitors; all of that changes. For rookie drivers like me experimenting various vehicles and different types of races it is essential to gain in maturity. I already drove a GT car, LMP, NASCAR and a FR 2.0 single seater. I really enjoyed all of them. But after preferences and experience, I approached more with a choice to the NASCAR races for my future career.

With the competition getting stronger and stronger, what do you expect from the upcoming season? Who will be the main contenders?

The stronger the competition will be the more exciting the NWES will be for the public and rewarding for the drivers. Keen competition is my greatest incentive to deliver the best. It maintains me outside of my comfort zone, where I usually develop my experience in a fast pace.  The upcoming season will be new and exciting for me. I don’t really know who will be my main contenders, but I know for sure that all competitors are excellent drivers.

What makes being a part of the NWES special to you?

I feel incredibly lucky to be part of that iconic Championship. In the US, NASCAR is one of the most popular sports. It relies on exceptional drivers and each race is a tremendous celebration. Yet, this this form of motorsports is still little known in Europe. NWES holds and promotes amazing shows for the European motorsport enthusiasts to enjoy. Each NWES member contributes to expand the European success of this sport. That‘s why it is so special to be a part of this Championship.

What is the biggest adjustment you have had to make to driving a NWES race car?

As I mentioned previously NWES race cars differ substantially from  a single seaters. The driver has more space to move and its position much more comfortable. Stock-cars are heavier, less aerodynamic but their engines are more powerful than the single seaters cars.

Is there an event on the calendar you particularly look forward this year?

I look forward hitting the throttle on the oval track’s wide curves. That will be my first time even on that emblematic kind of race! That will be in France, my home country, in the city of Tours. In my opinion, that should be one of the roughest races of the season. With no “real” corners compared to a “normal” track, speeds are higher, distances between cars are reduced and overtaking is more complex. Battles are relentless during the entire race.

Is there a moment from your career so far that you are particularly happy to remember?

My career has begun just some years ago, but I already lived lot of deep and joyful moments in it. I hope that will continue as long as possible. So far, one of my happiest memory goes back to 2015, when I won the World Grand Finals ROTAX in Portugal. That race has gathered more than 150 competitors, from 72 different countries. It was a rough and fascinating battle.

What is your training routine?

Sport is my main passion… with a car races of course! So it come as no surprise that my training relies above all on physical activities. I train on a daily basis but each day is different. Following my goals I swim, run, cycle and I exercise at the gym.