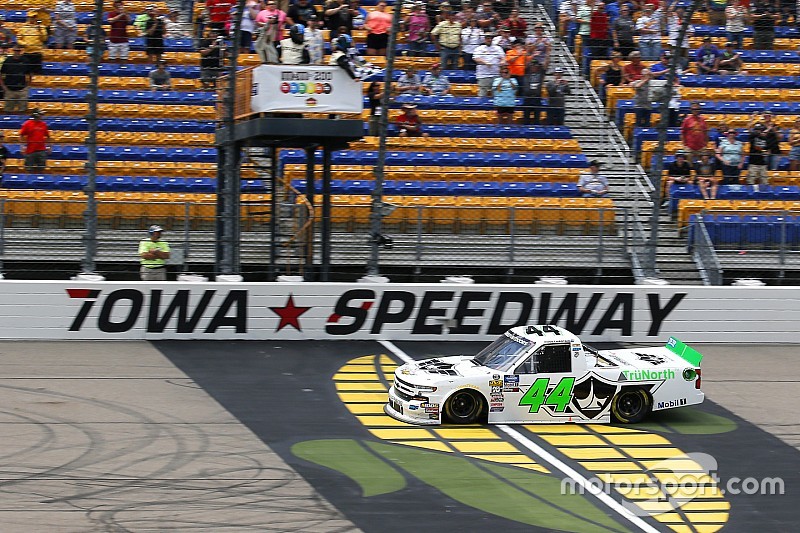 Ross Chastain had his NASCAR Truck Series win at Iowa Speedway on Sunday stripped away after his No. 44 Niece Motorsports Chevrolet failed post-race inspection.

Chastain becomes the first victim of a new policy adapted by NASCAR before the start of the 2019 season that disqualifies race winners who fail at-track post-race inspection.

The front of Chastain’s No. 46 truck was found to be too low when measured after the race.

“Basically we have a procedure and rules in place. Trucks are restricted on their ride heights on the front and rear of the vehicles,” said Truck Series director Brad Moran. “Unfortunately, the No. 44 was low on the front – extremely low.

“We do have a process of what happens at that point. They do get an opportunity to roll around and put fuel in the vehicle and air in the tires. In about five to 10 minutes, they roll back up and c heck them a second time. Unfortunately, the No. 44 did not rise in the front at all.”

Given that he had said the truck was “extremely low,” Moran was asked if it was fair to say the issue was not a “close call.”

His reply, “The height sticks have warning yellows and then reds and it was off of all of them and extremely low.”

Moran said the measurement never changed after the team was allowed to make all the changes it was allowed.

"Our Niece Motorsports team works hard to ensure that our race trucks are within the confines of NASCAR's rules. Both of our Chevrolets passed opening and pre-race inspections. We believe that the No. 44 Truck sustained minor damage during the event, which left the truck too low following the race," he said.

"We will appeal NASCAR's decision. Regardless of the outcome, this team will be prepared to go to Gateway and win again."

With the disqualification, Chastain loses the win, the right to use the win to make the Truck Series playoffs, all of his bonus points from two stage wins and is awarded last-place points (five points). He also loses the $50,000 bonus that was awarded as part of the Triple Truck Challenge.

The win gives Moffitt his first victory of the 2019 season, which qualifies him for the series playoffs. He also collects the $50,000 bonus and is eligible for another $100,000 if were he to win again next weekend at Gateway.

“Obviously I was very disappointed finishing second. It’s a big change of emotions and it’s not the way I want to win as a race car driver. I still got beat on track, which is frustrating,” Moffitt said Sunday afternoon.

“Back in the beginning of the year when NASCAR implemented the new system, it was to clear up the Tuesday encumbered wins and let the fans know who actually won the race. I would still would rather take the checkered (flag) and be the first one to it, but I’ll take the win any way I can get it.”