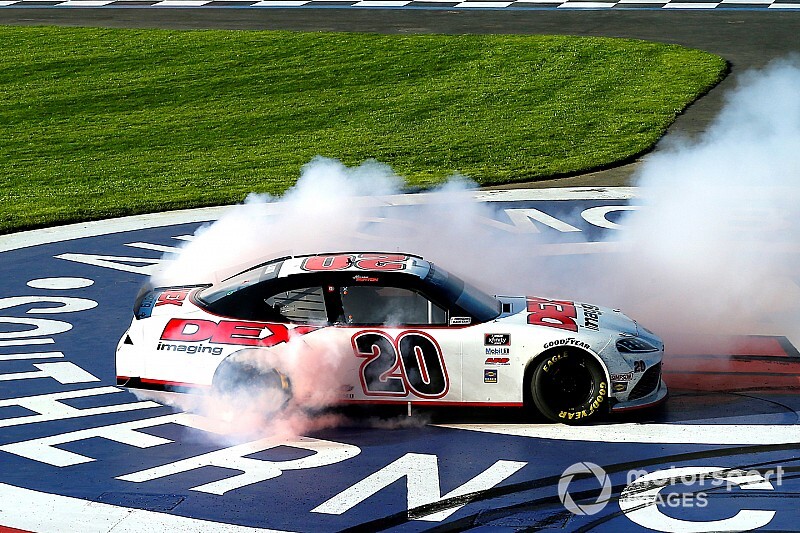 The victory is Burton’s first in 12 series starts and first as a fulltime driver in the Xfinity Series and all-but locks him into this season’s p layoffs.

Burton, a former champion in what is now the ARCA East Series, joins Hank Parker, Jr. (2001) and Kyle Larson (2014) as the only drivers to earn their first series win at Fontana.

After doing a smoky burnout on the frontstretch following his win, Burton’s No. 20 Toyota had to be towed to Victory Lane for postrace ceremonies.

"Heck yeah, man, this is awesome," Burton said. "All we've heard is that we can't do it - we'll never do what last year's (No. 20 team) did but we're off to a good start. It feels so good to win. There's times when you go through a little bit of a drought and you doubt yourself. But to get a win feels so good, especially after last year. We struggled a little bit (in Trucks).

"Once we moved up to the top (lane) at the end, it was going to be really hard for (Herbst) to pass us. I was trying to be smart and not put it in the wall. The whole team was huge. I'm just so happy, man. This is something I've worked so hard for and my team's worked so hard for.

Haley spun off Turn 4 on Lap 82 of 150 to bring out the first non-stage caution of the race. Haley headed right to pit road with a flat right-rear tire.

The race returned to green on Lap 86 and Justin Allgaier jumped quickly to the lead before the caution was displayed again for an incident between Michael Annett and Brett Moffitt that also collected Brandon Brown and Joe Graf Jr.

Daniel Hemric was scored as the race leader when the caution was displayed. The race returned to green on Lap 91. Allgaier quickly returned to the lead on the restart.

Following a brief caution for a spin by Matt Mills, Haley inherited the race lead when he elected not to pit. He led the way on Lap 97.

As Chase Briscoe bolted to the lead on the restart, Noah Gragson and Ross Chastain wrecked off Turn 2 to bring the caution out yet again. The race returned to green on Lap 102 with Briscoe still out front.

On Lap 109, NASCAR displayed the caution for a tire carcass that ended up on the track in Turn 4 after it was hit by Allgaier.

On Lap 118, Burton went to the inside and took the lead away from Briscoe.

After brushing the wall a couple times, Briscoe spun off Turn 4 on Lap 126 to bring out a caution. The lead-lap cars pit with Burton the first off pit road and he led the way on the restart on Lap 132.

With five laps remaining, Herbst had cut Burton’s lead to under a second as he tried to run him down.

Brandon Jones continued his impressive run in the race, leading the first 70 laps on his way to a sweep of the Stage 1 and 2 victories.

Following the break between Stages 1 and 2, the lead lap cars elected to pit with Jones the first off pit road and he remained in the lead on the restart on Lap 43. He was followed by Burton and Hemric.

Austin Hill was penalized for speeding on pit road during his stop and had to restart from the rear of the field.

With 20 laps to go in the second stage, Burton – who dropped back to fifth on the restart – made his way back to second. They were followed by Hemric, Briscoe and Cindric.

After 60 of 70 laps in the first stage, Jones continued to hold a 1.3-second lead over Burton with Hemric in third. Briscoe had tagged the wall but was able to continue.

On Lap 63, Hemric got around Burton to retake second place.

With five laps remaining, Jones’ lead over Hemric held steady at about 1 second.

Jones held off Briscoe to claim the Stage 1 win, his first stage victory of the 2020 season.

Burton was third, Chastain fourth and Hemric rounded out the top-five.

Jones, who started on the pole, took early command of the race, building a nearly 2-second lead through the first 15 laps.

On Lap 28, Briscoe got around Burton to take the second position and was gaining considerable ground on the leader.